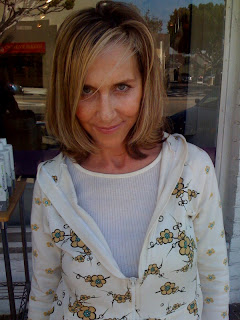 This may have something to do with the Grand Canyon divide between my kid's ages, what feels like my 7 lives, or simply my fading memory. I could have sworn, let's say on a Bible, that I was a child during the Woodstock weekend. Child, meaning, a girl who still played with Barbie Dolls and played dress up. My older sisters were the ones pretending to air guitar Beatles songs and I have a faint memory of the eldest crying when Jimi Hendrix died. I thought he was one of her class mates. Okay, so, perhaps it was the times. Kids were kids. 8 year olds did not go to rock concerts and raves. I live in a split world.

This is causing me great confusion. I barely remember being 6, but my sole purpose was using the The Easy Bake Oven. My girls use the real oven, with real ingredients and frankly, their cookies are better than mine.

With a son nestled in a Children of the Corn college, albeit a great one, but still, who knew Pittsburgh was the midwest? And 2 little girls who want to be Hannah Montana, and my memories all now becoming quite blurry, I honestly can't remember how old I was as Woodstock raged on. Weirdly, I do have a vivid memory of when JFK was killed because my mother and all of her friends, then our entire neighborhood, fell into a kind of grief I had never seen before. A river of tears seemed to pour down our tree-lined street. I was quite young, but do remember eveyone sitting around the TV watching, weeping and wailing.

Of course I can look at dates and figure it out in 5 seconds, but the other part of this is I stopped counting birthdays after 40, adding further confusion. What's the point? I think the real shock will hit me when someone asks if my girls are my grand-daughters. They certainly could be and I have noticed lately girls having babies while still in their teens.

My husband doesn't even know my actual age, as he is younger and we like to say we are the same age. Well, okay, I do. But then he started getting older, and I stayed the same age, so, in fact he is now older than me.
Posted by Rhonda Talbot at 9:09 AM