Proof I have actual parenting skills!

I really hate the beach. The sand, the sewage smell, the hordes of people who have no business taking their clothes off in front of others. But summer was coming to a close and the girls were begging to go. All day. I figured they would tire themselves out then it would simply be too late. But by 5pm they were thowing water balloons into my office. I have no idea how to discipline my kids. "Knock it off!" That didn't work. I almost threatened to send them back to the hospital, totally old-school like my parents did to me, but where we live that would simply be child abuse and the girls know it. All those old parental threats don't hold water anymore: the reservation, your one-eyed Uncle, the zoo.

"You are the worst mom! Dad loves taking us to the beach!"
"Well good for him. He's not here, now is he?"
I went back to working on my computer; because, see, my plan is to earn enough money so we can go stay at a 5- star hotel in Hawaii; I sit in the lanai, say reading a book or getting a rub-down by a gorgeous native guy wearing one of those diaper wraps, while the sacred DAD takes the girls to the damn beach.

Suddenly I'm hit in the side of the head with a huge moldy lemon. Then another. We have a lemon tree, but no one ever trims it, so it produces what are supposed to be lemons, but they look like moldy grapefuit and they are hard as rocks for some reason. They also stink and are disgusting.  Thing One and Two are launching them into my office like missles. I am so pissed off, but they don't believe any of my threats, potential punishments or even what could pass for a scary face. I don't even know how to make a stink eye or I would give that a shot.

The sun was about to set, so I had that going for me. No traffic. I drove 90 miles an hour until I could see a place to pull over near the Pacific. I jerked the car onto some dirt behind what looked like an outhouse, but I think was a trailer. Once the dust settled we got out of the car.

"Mom, why are you such a bad driver?" Thing One and Two ask this in unison. They ask all the time, but usually after I back into a garbage can or shopping cart. "Dad never hits anything! And his car smells better!"

"Hey! Did you see that? A dolphin just did an aerobatic somersault!"  When in doubt, distract. The girls leapt out of the car like their car seats were on fire. The inquisition was over.
The sun was setting, so we could still kind of see as we stumbled down some rocks (here is where I broke a tiny bone in my foot, a bone, btw, I have broken before doing the same thing... that is, wearing the wrong shoes climbing on rocks at the beach, in the dark.. in fact, very close to this part of the beach.)  But the thing about broken bones in the feet is there is not much you can do. The pain is minimal and this time I was ready; I didn't go out dancing in high heels the next night. Instead I just walked around like a regular person.

In any case, the night beach trip seemed to satisfy the girls. There were maybe 5 people standing around, most fishing for dinner. My kids thought that was "awesome" and wanted to fish as well. Good luck, I was thinking. I handed them both a long twig.

"How do you fish with a stick?"
"Where do you think fish sticks come from? Hello!"

They took the sticks and stared at them. Then Thing One saw something glittering in the filthy sand and proudly held it up. "Mom!  A hook!"

I gasped and grabbed the dirty syringe from her little hand and flung it back into the ocean where it belonged.

"That hook was way to old and used. Sorry, honey."

They threw the sticks on the ground and noticed the seaweed-riddled sand was blanketed with clams. That would explain the swarm of teensie flies I kept smacking with my purse.

"Oh my god, mom. Look! We can make a pearl necklace."  The started scooping up the stinky clams then asked for my brand new hoodie to hold them in. Gross. But I did it. Because that's the kind of mom I am.

I heard a loud belch and that is when I noticed the outhouse/trailer. And the pig that lived in it. She was all boozed up, bloated and probably insane, but kids needs to see sometimes how other people live. So, I struck up a conversation with her.

"Catch any big ones tonight?"

She eyed me suspicously. Maybe it was the Prada sandals, the strappy dress towing two girls also fully dressed.

"I'm not a narc," I told her, like this was high school. But the look she gave me was familiar. People always thought I was a narc in high school. To this day I don't understand why.

"Well, we got some trout," she slurred this, and I detected a redneck twang. But hey, I am not one to cast aspersions. She pointed to her make-shift BBQ that sat just outside a piece of cardboard that passed for a door.

"OH MY GOD! Are you going to eat the head? Even the eyes? Cool!" Thing One enthused. Then Thing Two, the sensitive one, screamed.  "Fish head! Fish head! Mom!! What's wrong with her?"

I pulled the girls back toward the beach and away from the strong stench of body odor and rum. Cheap rum.

We moseyed along, the girls sticking more stinky clams inside my beloved hoodie, then I thought I might chalk up a conversation with an attractive Asian couple, maybe mid-forties. I'n not sure what compelled me to do this as I hate most people but I needed some type of normal interaction for the girls to witness.

The man looked at me like I might arrest him. What was with all of these people? 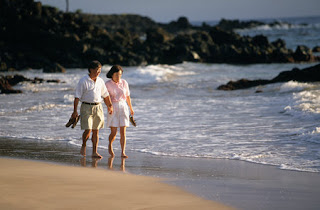 Maybe they didn't understand English. Out of nowhere, the mother starts screaming some kind of Asian gibberish at her two small boys and then they just, run. All of them. Like at any moment, we will be eaten be by sharks. I scratched my head. I looked around to see if there were any signs indicating this might be an illegal part of the beach, but saw no such sign.  Then for second, I wondered if someone stuck a post-it on my back reading "Beach Police."

The sun made it's final descent, and now in the complete dark, the girls and I clambored back up the rocks to our car. As we buckled in, the boozy trailer lady peeled away in front of us, leaving tread marks. She must have packed her hot BBQ because it too was gone. This was all so puzzling. 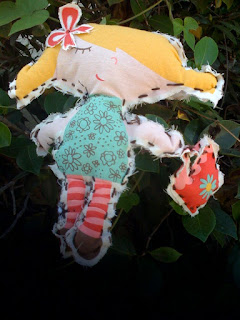 But I must say, the highlight of that night is this little doll. I have no domestic skills on any level, but I thought my kids should learn something about sewing. In a proper manner. Never mind that a while back they had already gotten into some old sewing kit I stole from the Four Seasons and stitched heart patches on their blue jeans.

So I had gotten this kit a few months back and when we returned home, I would surprise them with this great activity; something the three of us could do together. A mommy and daughter thing. However, 2 minutes in and the girls were gone. Fuck em. I was adamant about the doll and wanted to finish. It took hours. I think the girls were pitching those fake lemons over the fence and into the street. But no matter, I had to finish. When done, I was so proud.

"Girls! Girls!  Look how beautiful she is!"  Thing One rolled her eyes and walked away.
"Mom, we hate dolls. Anyway when is dad coming home?"
"But I made her, like from scratch."
"Mom, you made her from a kit for 5-year olds and all the lines are uneven, and she's missing an eye and she's ugly," smirks Thing Two. With that, she grabbed my doll, stormed out to the front yard and threw her into a the camillia bush.
"Go to your room! Right now. And no dinner and you're grounded!"
"We are both already grounded."
"Well, then no more beach outings!"
They both started to giggle. "Dad will just take us."
I ran outside to retrieve the doll, held her in my arms and caressed her so she wouldn't feel rejected.

"Where's our dinner, mom?" The Things screamed.
"It will be okay... Sally." I named her right there on the spot. And her permanent wink held more meaning.

I love her. I had no idea I could sew, and who cares if the kit was for 5-year olds. It's was actually pretty damn difficult; the cutting, staying in the lines, the stuffing.
Sally sits on my desk all day, always winking. Like she knows something.
Posted by Rhonda Talbot at 10:25 AM