I have been under the sea with work, so haven't had much time to write, or do much else. Buying movies and meeting with producers and agents can be lot of fun, some of them are even decent people. But I have too many meetings scheduled sometimes and get mixed up. So I was in Mr. "I cheat on my wife but you'd never know it" today, though I was supposed to be in a  meeting with an executive who wears high heels and hangs his hosiery on his baloney ledge. Nonetheless, the conversation could've been the same.

So, by the time I got home, OH, forgot to mention, someone rammed into my car, then took off, I was spent. Of course the Things don't know what kind of day I had because they are all about fun and joy and "oh mommy, I saw the prettiest hummingbird today outside, plus butterflies, snails and faeries!  But the bird never flew away. Do you think there is something wrong with it? Please come look, please! It might be dead! Oh no!"

"Well it can't be dead if its humming. Say, why don't you draw me a picture of the bird while I return some calls."

And I handed her some post-its.

You would have thought I gave her a pack of matches given her exuberance; she was practically exploding with excitement. And of course, that is precisely what I did.

She runs out of the room to show Thing Two; they are just beside themselves. Giddy, screaming. 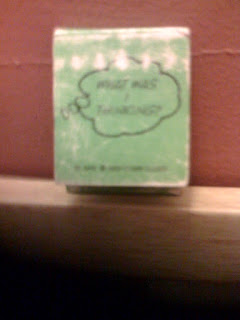 Then I smell the sulfur. Once again, I took an action without wearing my glasses. 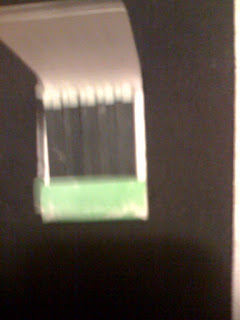 When you look at the small green tablet, it does resemble a post it pad, particularly when you can't see.

So I rush into their bedroom and honestly, they must have gone through the entire pack. (Please see footnote at bottom)

I am no stranger to fires as I once set my apartment on fire, by accident, of course, by forgetting to blow out a scented candle that sat on a wicker hamper in the bathroom.  In my defense, I was just 22.   Then there was the fire a few months later in a different apartment, where apparently I fell asleep while smoking. When I woke up to to smoke infestation, I noticed I also had a bag of Oreos on my lap. I quickly hid those back in kitchen because now that is embarrassing. Those great firemen came out, everything I owed was ruined due to the smoke. Except the 14 inch vibrator that was under my bed. When the  firemen, all 8 of them, pushed my bed off to the side, we all kind of looked at it.
"What is that thing?" I played the stupid blond. I had no choice.
"Looks like, um, a back massager."
"Oh, of course. My mother must have forgotten it when she last visited. Rheumatism. Anyway, go ahead and toss it."
A few years later, there was the fire cause by my leaving an area rug over a ground heater. Who knew? And what a commotion! 4 firetrucks, 12 attractive men, me, the damsel in distress and my then baby boy.   These men were so handy, they pulled in a hose and blasted the area with heavy streams of water. Fortunately, nothing was damaged. Just soaked.
"Can I get you boys a beverage?"
I truly hope my fire karma is not something the girls catch. So, I hustled up the girls, cel phone in hand, and waited for the boys. I do love firemen. They are so fast and so kind. By the time we found the hummingbird, alive and humming, the fire was out.  So good news, it never got to this.

I guess the lesson is no matter how small the matter, I need to wear my glasses.
Footnote:  Okay, there was no fire, no curtains ablaze, in fact the Things never got a match lit, though they gave it a go. And no firemen. But a girl can dream.
Posted by Rhonda Talbot at 8:56 PM