I have never claimed to be an artist, that is, drawing, painting, sculpting and so on. Though I grew up surrounded by oils, turpentine's, canvases, paint brushes, paint cans.  Our house or wherever we lived would be turned into an art studio by the time we unpacked the alarm clock. My mother is an artist, and a good one. At one point, she had gallery shows, was written up about in newspapers and so on. As a child, this absolutely horrified me. I found it all so embarrassing, especially since her artwork was not exactly to my liking. She would go from still life, say galloping horses frozen mid-air, to floating cherubs stuck inside a cloud.

When we were low on cash, which was often, she painted on the apartment walls. Huge murals. I was successful in hiding her artwork before I had friends over but there was nothing I could do about every wall in our house or rented condo, so if say, a boy I liked was visiting me, he was never allowed in. We would sit on the front porch. Even if it was below zero; this was Michigan.

"My mother has a rare form of leukemia and it's contagious to non-family members." This lie not only kept the boys out of the house but made them feel compassion for me, usually leading to their putting an arm around my waist. It was a win-win.

So many years later, and free of my mother's constant need to paint, I now have a 7-year old daughter who shares this obsession, though she does not paint on the walls. Without any formal training by age 3 she was drawing pictures from memory in perfect dimension, often with shading, and light reflection.Coloring in a childrens book was beneath her.

"Why would I want to color someone elses picture?" Then she would draw her own. 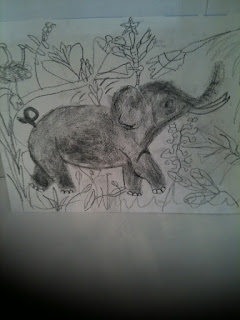 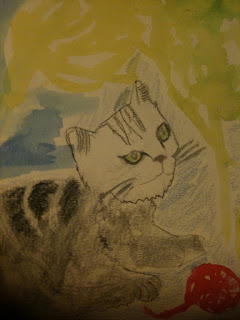 I have recently turned her over to an artist and teacher since my limited skills and knowledge, well are limited.  To illustrate, above are a couple of Thing's most recent drawings.  "Elephant Unfinished" and "Cat."

She then asked me to draw a cat. I was horrified and tried to get out of this task, knowing I would once again look foolish to my children.  Her sister was smiling, knowing I totally fail. Maybe she was smirking. For the record, she too has started an art class but her first piece is not done yet. She also already exceeds my ridiculous ability.  So here is mine. 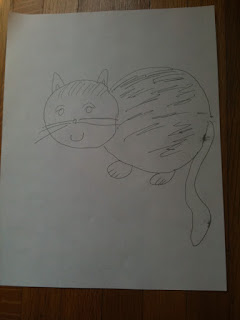 Now,the girls were more kind than I had anticipated. Thing One (who drew the above animals) had only one comment. "Well, mom, your cat is kind of fat."

Thing Two had something else to say.  "Mom, that is terrible. You should throw it away before anyone sees it." It could have been worse. 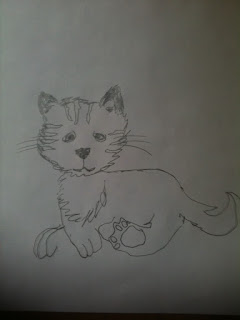 Then she drew this cat, to give me an idea of how a cat might look reposed.  But Thing Two likes to draw more abstract than her sister so here are a couple of her drawings before her own big art class begins next. 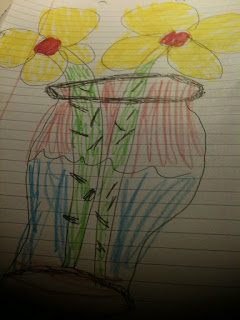 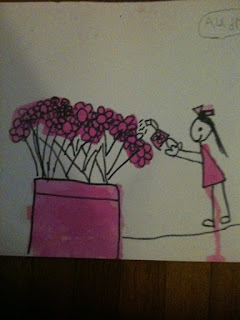 Okay, she clearly loves flowers and if you saw my house and yard, you would understand why I don't need a gardener.

Just so I don't feel completely left out, when I was 13 I made a couple of lithographs for school. Years later, my mother, possibly in a maudlin stupor, framed them and sent them to my work place. People were impressed and in fact bought them. So my mother sent me more copies.  I have two remaining and here they are. I have since diverted my artistic inclinations to other venues, but I do love these, particularly the one my mother refers to as "Two Girls Watching TV."  This was decades before I would have the girls but she went on to say that the "Goggles" complimented the duo because I would most certainly need them, and by that she meant tinted, perhaps opaque glasses in which to survive my darling Things. 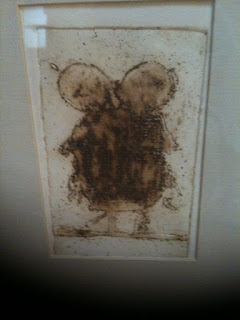 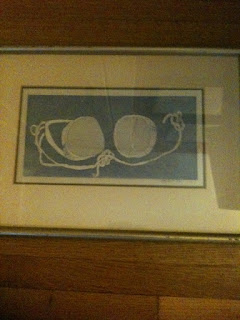 Posted by Rhonda Talbot at 8:48 AM