Flattery Will Get You Everywhere and Me Well..... 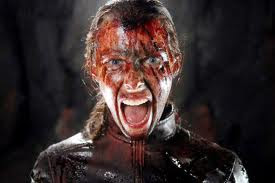 Anatomy of a Pitch That Never Happened

Though no stranger to writing books, short stories, or screenplays, I had not yet written a half hour comedy for TV,  and had an idea that seemed to only lend itself to this venue.

I asked an agent friend for a decent half hour so I could look at the format, 5 days later I had my own.
I gave it to her; she loved it and wanted to “take it out.” But first she needed to attach some strong TV elements since I had no TV credits.

“You are a nobody in the TV world.”
“What about the Breaking Bad guy or the Californication guy?”
“Trust me, you are nobody.”
So her big plan was to hook me up with a “show runner” from her agency.
“Shouldn’t we go outside your agency? I have a whole list and you only represent a few.”
“No, that is not how it works. Jesus!"

Any reasonable person would have left this bitch, but I was going on a kind of blind faith, given she kept repeating over and over again how she was an expert in this area.

This expertise lead her to the agencies biggest clients, two film directors. They were not show runners and I asked about that.
“They are GETS! Do I have to explain everything to you! Any network would jump at the chance to work with them. Just go meet them and stop with all the questions. You sound really aggressive!”

So I did, and of course it was flattering to have one of them, an extremely talented director, compliment my work. But it was the other director that attached himself, without my being consulted. The agency was in fear of losing him, and he kept telling them he wanted a series on the air; a cable series, which this was. Well, why not? He would be set for life if it was successful. Here again, I wasn’t savvy enough to understand unless it’s Spielberg or Scorsese, a director can’t guarantee getting a show on the air. And they didn’t represent them.

“Boy did she throw you under the bus.” This came from my husband. I had no idea what he was talking about.
“She’s helping me. She’s my friend. She wouldn’t do that.”

“She’s an agent. They have no friends.”

While I was in NYC she set up meetings at 2 top cable companies without telling me. Okay. However, before we go, and the agents attend, plus their assistants for some reason, I am instructed to NOT SAY A WORD, as in “don’t open your mouth.”

Despite the fact that the half hour and the 15 episodes I wrote are a heightened page out of my life and the voice is purely my own, I found this odd. “This is procedure,” is how they explained this.

“They just want to hear the director speak. He is the “star” here. Not you.” Now, the director in question had made a a number of films, one I had seen and liked, the others I had to rent. And it had been a while since his last. When we met, I liked him. He was charming, direct and like me, understood something about children. "This is some great shit.  Really unbelievable." He smiled, then left.
.
During the actual business meetings I had many urges to speak, to talk about the character, how she would navigate this world, why it’s funny, why people would tune in and how she speaks for millions of women across the U.S.

"We love this," the executives both said. "It's so fresh, original, daring."

This was the agents cue to speak, apparently she had an urge too, before I could get a word out.

"Right? It's almost like I wrote it! It's so cutting edge."

"But let's then the director take it from here," she continues.

He was lying back on the sofa, decked out in slacker wear, spoke in surf speak, “Well, I would shoot it, yunno, like Californication style yunno, give it a sense of realness, yunno.” Then he did a hang ten sign.

“I see you shot a couple of L Words,” the executive observed reading the directors credits.
He smiles. “Yeah. That was fun.”

“I bet.” This executive was male, so they went on for a while about how hot the lesbians were and how the director sees them at the beach all the time, riding the waves, their breasts flapping, or not,  in the sea breeze.

The other meeting was pretty much the same, all men and these agents. In the last meeting I started to talk, I couldn’t stand it, and my so-called agent friend KICKED under the table with her Gucci pump, leaving an actual bruise on my shin.

A few days later, one of the companies showed great interest but apparently took too long for surfer dude, who was getting antsy and managed to get a job on the high seas, quickly boarding a jet.

Me: “So are we going to get a show runner now, someone else?”
Agent: “Nah. He left. Why don’t you write something else? We gave it a shot.”
Me: “Gave it a shot? We went to 2 places.”
Agent: “You sound really aggressive. Let’s talk later.”

Some time passed, I got busy with other things; then went with another agent who sent it out to a couple of production companies, both loved it, both seduced me. But at least I got to talk and they wanted to hear what I had to say.

The 2nd of the two, the female head of production was clutching my script to her bosom. Of course, I immediately liked her. Pretty, clear skin, soft hair, pictures of her lovely family everywhere. She had tears in her eyes.

“Rhonda, I love this. I can’t let it go. It is the best thing I have ever read in 20 years. I had to have it. We will get it on the air. I’m even thinking network. Why stop at cable? She went on, and I liked her vision, ideas, or maybe I was just so flattered she couldn’t have said we were going to cast it with animals and I would have agreed.

So I left, told the agent my decision and met with her again, except this time she wasn’t there. I met with her 2nd in command. Dina. Dina was all work, no laughter, rail thin with droopy hair, a very sterile office, wearing an Ann Taylor suit, nary a picture on the bright, white walls.

Dina said she too loved the project but we needed to get it into shape before the “pitch.” The networks were closing their “pitch window” in 2 weeks so we had to move fast. By now, she had completely dissected and deconstructed my entire project so it would be more “blue sky,” “audience friendly” and other mumbo jumbo she felt more comfortable with. She had red lined all the parts that might be considered “offensive” or where the mother appears “unsympathetic.” (This was before Nurse Jackie or Tara.”)

So much was red lined it looked like one of my child’s fake grocery lists.

“I see this as a family friendly Lucille Ball meets . Our favorite show is and that is what we responded to, but would Lucy really set a man on fire?”

“Well, in today’s world, if said man was a child abuser, yes. And anyway, he isn’t hurt and it changes his life around for the better.”
“Yes, I know that, but will the audience know?”
“Well, if they watch it!”

It went on like this over and over, and I spend 6 hours a day reconfiguring the project “without losing the integrity of the piece, the humor or the outrageous behavior of the protagonist.” Which I did. So, then there were two versions, one for cable, one for network. But time was of the essence as we only had a week.

The following day, Dina said, “Okay, Courtney, (her boss and the one that nearly breast fed my original script) is ready to see you now and hear your pitch.”

I went into the room expecting hugs and kisses but instead was met with Courtney’s evil twin, a hard-edged, cold executive who acted like she didn’t know who I was. She was on the phone; then checked her emails while I stood there, understanding this was not going to go well.

She settled into her puffy chair, legs tucked under her tunic, draped in colorful scarves. What happened to the pretty girl I met in a T-shirt and blue jean?

I start into the pitch… 10 seconds later, Courtney held up her hand.

“Stop there. You aren’t ready. Dina, I thought you were getting here ready. We have 2 days left.”
Dina glared at me like I failed her.
“I kept telling her to practice in front of a mirror. I gave her everything I had!”

I glared at Dina the turncoat then back to the multiple personality posing as a TV executive.

“This is ridiculous. Why don’t we just send them the 12 page document that lays out the premise, character and the episodes?”

Courtney looked at Dina as if to say, could she be any more stupid?”

“It doesn’t work that way. That is a “leave behind, along with your script which is now a writing sample.”
“What! I thought it was the pilot.”
“No one will make that. It’s too dark. She is too unsympathetic as a mother. Christ, she pretends to be a hooker! Women won’t watch it. We were trying to help you Rhonda! I am so disappointed! This was going to be my big show!”

“But Courtney, all the best female characters are complex. Every mother has loads of moments where they don’t like parenting. My character went from being a high powered executive to a crazed stay at home scraping peanut butter off her expensive sofa! You think she is not going to be a little angry. Not to mention no one will hire her. It’s cathartic. Mothers know this, but no one talks about it. I want to talk about it, show it, make it funny… it’s all those women screaming at their kids at popping anti-depressants. This way, they watch the show so they don’t have to go tazer perverts or light child abusers on fire. Kind of like why men watch football games.”

“Look, I love your passion but you are not ready and we cannot take the risk. Just keep working on it, there is always next year.”

I should have gone with the other company; a mantra that was quickly grooving an obnoxious path into my brain.

After leaving, I learned Courtney got fired 2 weeks later and Dina has taken a job as an agent’s assistant. Meanwhile, I sit back and watch all the so called “bad mom” shows airing, a virtual avalanche, besides Weeds, Tara Nurse, Jackie, Cougar, now the The C Word and at least 4 more coming.

My project now sits with another agent, one I very much like. I have moved on to all sorts of other things, even turned this into a screenplay, that honestly, only Leslie Mann is suited to play, but getting to her; well, so if you know her…. then the books, my work and all my children. But when my husband told me this agent “threw me under the bus,” I wasn’t sure what he was talking about. She was also my friend. But now I know what the term means all too well.