It’s impossible to not notice all the signs, billboards and ads for the upcoming show featuring Playboy Bunnies. This has caused me a great deal of stress, not just because it seems the entire world is going backwards, but because it dredges up memories I really would rather forget.

Walking to my local village yesterday, there it was, the shiny bus ad, with scantily clad girls wearing onesies, bunny ears and poofy rear-end tales, smiling like it was fun being pawed by sinister, alcohol-fueled men. As a child from a splintered home, with a very young, pretty mother who had to make ends meet for her six kids, she took a job as a “bunny.” These clubs were all over the high-end areas of cities, though we lived on the fringes of such wealth. 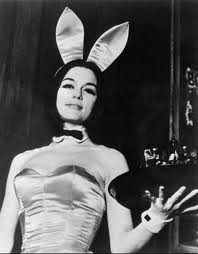 When she landed the job, she was quite excited, after having toiled as a secretary, housekeeper, babysitter, factory worker, and possibly a prostitute but that was never confirmed. We kids looked after ourselves, and I raised the younger ones.
She saw the Playboy opportunity as her ticket out, and was desperate to make the right impression. She already had the youth, (26) the shiny white teeth, pretty face, long, luscious hair, the appealing figure, despite the kids, and an incredibly outgoing personality I can only now chalk up to her being bipolar. My mother raised me to believe in myself, never be put in a cage by a man, and educated me in patriarchal history.

Prior to her first day, one thing was missing. Balance. It was essential, in fact number one on the Playboy Bunny Cocktail Waitress list of instructions. Night after night, after I finished my homework, and the little kids were sleeping and my older sisters were out shooting heroin somewhere, we trained. She would walk on sofa pillows, carrying a laundry basket over her shoulder filled with water glasses, in impossibly high heels. We broke all the glassware, but we had stolen it anyway, so in didn’t really count.

My mother lifted glasses all the time from her housekeeping jobs, be it a motel, hotel or house. Because we had very little, sometimes she’d also bring home plates, spoons, cloth napkins, canned goods and oil paintings of ballet dancers.
We would practice for two hours a night until she got down to only breaking one glass, then she felt ready. Next up; a trip to the local drugstore to steal eye make-up, false lashes, push-up bras, fake tanning crèmes and four pair of high heels.

“They will never suspect a ten-year old. I will cause a distraction.” And that she did.

“HELP! SOMEONE! I’m having a stroke!” There would be a rush of people gathered around, and I would slip out. My mother would calmly rise, “Oh, never mind, I think it was gas.”

My mother suffered from this delusion she would meet Hugh Hefner. We lived in Detroit. Not likely, but there was a chance she would meet a rich man who would finally marry her, and get us all squared away someplace in say, Carmel, preferably on the beach overlooking the ocean.

Forget she had six kids all under the age of 13, two heroin addicts; a toddler still in diapers, one Canadian goose she had dragged home, a litter of Siamese cats, and a couple warrants out for her arrest for speeding tickets. It was during her stint being a bunny she also picked up a strong affliction for wine spritzers.
But she needed fantasy. And the reason I write this is so do I. Somehow this ridiculous TV show brought all this back.

When in doubt, or I should say riding some kind of mini-breakdown, I call my mother. Over the years I have figured out perfect timing before she goes in for the kill--"utter disappointment" is her nickname for me after say, five minutes on the phone. But until that point I find a kind of comfort, the imaginary mommy/cookies kind. Not that she was ever that person.

Despite my own delusional 15 years of wanting to live in a lovely Cape Cod, cliff-dwelling home with a white, minimalistic pristine interior, the grand piano overlooking the pacific, along with a personal chef, an assistant, a few nannies and an on-call masseuse, instead I have lived those years in a crowded, unkempt home, albeit a nice one, though meant to be five years, add to that three kids, two dogs, 25 fish, half a dozen reptiles, a challenging job, low funds and no help.

Now and again I toy with the idea of driving off a cliff, but it's another fleeting fantasy, more like a default, since I don't drink, smoke, have affairs, gamble, or shop. Basically there is no escape.

“We all have our bad decades, honey.” Is the best advice I ever received from my mother. That and never marry a pretty man.

After accomplishing some difficult work, "top-notch" per client, instead of taking any kind of pride, I focused on how I still needed to go to the grocery story, make five complicated meals since everyone has an allergy to something, draw pictures of dancing lizards with the girly-girl twins, help with their homework, bath them, blow-dry their precious hair, read stories, tuck them into bed, speed-clean the entire house, spend ten minutes with my eldest boy child, and catch up with my husband which kind of goes like this.

“Don’t forget to clean out the dishwasher,” then retreat to my bedroom/sanctuary to read, my greatest pleasure, and also a way to avoid a potential rabbit hole that is my "desk" filled with bills, papers, unfinished writing projects, pictures and artwork never framed, thank you cards never sent, a call sheet that is two weeks old and forget the calendar, all skyscrapers of tedium and unresolved issues.

Back to walking through my village, burdened with Rite-Aid plastic shame-bags (I never bring my own,) I look up and see that Playboy ad, and am hit with my own tsunami wave of grief.

Naturally, my immediate impulse is to call my mom. It was good timing because she hadn't hit the NyQuil yet. She in fact has the life I want; lives on a remote island, white house, white gorgeous furniture, writes, paints, and has 2 PHD’s in poetry, despite her poetry bringing, well bad, hence a shift in our normal greeting.

"Oh, Dr. Judy, I'm falling apart, this is not fun; my life is over! I mean I love my kids, but the crocheting, knitting, reading books I already read, the homework, emails from school I ignore, hiding from the other parents who want to chat about the school lunch program.”

I am sobbing now, sitting on a curb, sandwiched between two Prius', and staring at the bus stop Playboy ad.

"Sweetie...I understand. But you need to change your attitude. You've accomplished so much, have beautiful children and a husband that does so much. The girls adore him. As you know, I'm not a big fan but you can't afford to lose him. You certainly couldn't do this on your own! I know all about four point restraints. You don't want that. Where is your gratitude?"

She went on, ticking off all the good things in my life, like my bathroom tile carpet. Her pep talk helped, or maybe not, perhaps just sitting down and taking a break for five minutes was what I needed; thus I forgot my time limitation as she rattled on about how great she was, her faaabulous life, yet another brilliant dissertation she was writing, so I wasn't prepared for the gut shank twisting.

"What the hell were you thinking having more kids? Yunno, for being bright, you are so stupid. And the way you dress them! They look like Bosnian refugees. And you have a sense of style, I made sure of that, you also could have married a very rich man, what were you thinking?" And on....and on...

"Look here sister, you have 20 more years of hard labor, there is no escaping it, you have to see those girls through until they are at least 28, then you can have your house on the beach. You have to earn it. I certainly did. You wanted more children so now no playing little miss victim!"

"Stop being a baby. I didn't raise you that way. I did it! And I had six kids and NO husband, that rotten good for nothing ogre."

Here, of course, she never elaborates. Yes, she had six kids starting at age 15, done by 26, left the ogre and doled the kids out to various strangers, one to my father, the others, well, just people, names long forgotten. I am the only one that stayed with her, mostly out of fear. At 12, I felt she needed someone to take care of her, given she was drunk most of the time and would often disappear for a few days. I worried, constantly. This is when my insomnia kicked in.

My mother and I did indeed move to Marin County shortly after her Playboy gig, (not Carmel and by ourselves since the others disappeared into various state appointed facilities.) I eventually left at age 15, determined to make something out of my life. I had grown tired of being her drinking buddy, bailing her out of jail, being late for class.

My mother is quite different now, stopped drinking, but still hits the NyQuil at night, her solution to the bipolar medical condition she refuses to treat as she hates doctors.

After I emancipated myself, she changed. Maybe she merely got too old for her insane Marin County life style, falling off of bar stools, going home with complete strangers, jumping naked out of sailboats, getting arrested for drunk walking. After I left for college, she started number of successful businesses, all of her kids somehow got out of Detroit alive, intact and found lives of their own.

“Did you know they are made a series out of the Playboy Club? I mean, how lame is that?”

“Oh, I saw, they play ads on TV all day. It’s the Madmen syndrome. Anything 60’s or 70’s surely has to be interesting. I think there is one about Pan Am stewards too. I applied there as well, but they didn’t think I was tall enough.”

I glanced up and saw a pretty mom, laughing and enjoying her two small children. I did that once...and still do with my girls, on a good day, but her carefree attitude was something that had become foreign to me. Her children were well groomed, hair clean, faces washed. They were all having so much damn fun, I had known that life.

With my son, my entire life existed around him while maintaining high profile jobs. I even enjoyed building Lego rockets, using all 14,000 pieces.

My mother was still talking. "Take your head out of your ass. You think you have it bad! I made sure all of you kids went to great schools, ate well balanced meals. I taught you piano, we listened to great composers, went to incredible museums. ALL ALONE, no help from a supportive father...libraries, dance, we were cultured!!! And I loved every minute of it. Sure we sometimes slept in the car, in community parks, in someone’s attic. But I paid a mighty price.”

"So stop complaining. I did not raise you that way! Who cares what you are feeling." She slammed down the phone.

I looked around at my village and knew I was blessed, even though I wasn’t feeling it. My mother’s rants, although sometimes painful, typically hold some kernel of wisdom. I would never have to jiggle my boobs and wear a bunny tail to make money, or work in a factory or clean toilets, so despite my mother’s unique style of child-rearing, she also in her way, paved the way, along with so many others. Sometimes I just need a reminder.

Posted by Rhonda Talbot at 9:42 AM