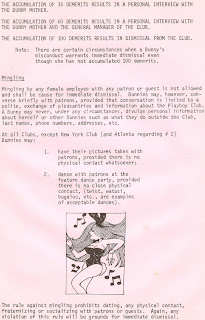 It’s impossible not to notice all the signs, billboards and ads for the upcoming show, "The Playboy Club." This has caused me a great deal of stress -- not least because all the publicity dredges up memories I would really rather forget.

I walked into my local village yesterday, and there it was: the shiny bus ad with scantily clad girls wearing onesies, bunny ears and poofy rear-end tails, smiling like it was fun to be pawed by sinister, alcohol-fueled men. I don't think that's how my mother remembers it.

I grew up in a splintered home. My mother was young and pretty, and since she had to make ends meet for her six kids, she took a job as a Playboy bunny. At the time, Playboy clubs were all over the high-end areas of cities. We lived on the fringes of such wealth.

When she landed the job, she was excited. She'd toiled as a secretary, housekeeper, babysitter, factory worker, and possibly a prostitute (that was never confirmed). We kids looked after ourselves, and I raised the younger ones.

Mom saw the Playboy opportunity as her ticket out, and was desperate to make the right impression. She already had the youth (she was 27), beauty, perfect white teeth, long, golden tresses, sexy figure (despite the kids), and an incredibly outgoing personality I can only now chalk up to bipolar disorder. One essential thing was missing: balance.

Unfortunately, balance was number one on the Playboy Bunny 26-page instruction or rule pamphlet. Night after night, after I finished my homework, we trained. Mom would walk on sofa pillows, carrying a laundry basket filled with water glasses over her shoulder, wearing impossibly high heels, the 5 pound manual sitting atop her head. We broke all the glassware -- but we had stolen it anyway, so it didn’t really count. (My mother lifted glasses all the time from her housekeeping jobs at nearby motels, hotels and houses. Because we had very little of our own, she'd bring home everything from plates and spoons to oil paintings of ballet dancers.)

We would practice the balancing routine for two hours a night until finally she could negotiate the pillows without breaking more than one glass. Then she felt ready. Next up: a trip to the local drugstore to steal eye make-up, false lashes, push-up bras, fake tanning cremes and four pairs of high heels. I was tasked with the actual stealing. "They will never suspect a ten-year old. I will cause a distraction," she'd say -- and that she did.

“HELP! SOMEONE! I’m having a stroke!” she would cry. People would rush to gather around, and I'd quietly slip out. On cue, my mother would rise, saying, “Oh, never mind. I think it was gas.”

Mom was incredibly proud when she aced her audition and was invited to begin -- but I could never quite relax. On nights when she was working at the club, I would stay up into the early hours waiting for her to come home; it was often well past 2 a.m. before I could finally get to sleep. Though Mom didn't give me too many details, I had read the “Bunny Manual” for myself, and knew how hard the job must be for her. So many rules -- hell for a woman who loathed regulation in general.

One night, I peeked into her bedroom after she arrived home. Because bunnies had to leave their satin corsets and medical panty hose at the club, I never actually saw my mother entombed in her painfully tight uniform. What I did see was the outfit's devastating physical impact: deep gashes that ran down along the sides of my mother's waist, rope burns outlining the tops of her thighs, and bloody blisters on every toe. She walked like a cripple before falling into bed. Sometimes she had to peel dollar bills and coins off her naked body. She later explained that the Bunny Mother would take each girl, stuff her entire upper body in the corset, and yank out her breasts, all the while instructing, “Suck it in! More! Stand up straighter!” The whole process was a miserable experience known as "suck, stuff and hook." The girls referred to the Bunny Mother as Haggis the Meat Grinder.

“I lasted three months," she tells me now. (It seemed longer to me at the time.) "I broke four toes, probably have a hernia, possibly broke a rib, and never met an available man" -- dating customers was technically off-limits anyway. "Because I was 'older,' I was never invited to the private parties. One married man did take a liking to me, and gave me a diamond bracelet, which I later pawned to get my car fixed. Funny thing is, there was nothing nefarious about the place -- no sex, no inappropriate behavior. We were just glorified waitresses in straitjackets. Hefner had an image to maintain."

Why did my mother -- who had taught me never to let myself be put in a cage my a man -- stick with the job, even for only a few months? For one thing, she suffered from this delusion that she would meet Hugh Hefner himself. We lived in Detroit. Not likely, but there was a chance she would meet a rich man who would finally marry her and get us all squared away in some Californian paradise -- preferably in a house overlooking the ocean. Forget that she had six kids all under the age of 13, ranging from teenage heroin addicts to toddlers in diapers -- not to mention a Canadian goose she had dragged home; a litter of Siamese cats; and a couple warrants out for her arrest.

I eventually left my mother -- who had moved out to Marin County -- at age 15, determined to make something out of my life. I had grown tired of being mom's drinking buddy, bailing her out of jail, being late for class.

After I emancipated myself, she changed. Maybe she merely got too old for her insane Marin County lifestyle -- falling off of bar stools, going home with complete strangers, jumping naked out of sailboats, getting arrested for drunk walking. After I left for college, she started a number of successful businesses, even got two poetry PhD's; all of her kids somehow escaped Detroit intact and found lives of their own.

My mother had her delusions -- meeting Hugh Hefner among them -- and I do too. for the past 15 years, I've dreamt of living in a lovely beach side Cape Cod home with a white, minimalistic, pristine interior, the grand piano overlooking the sea -- complete with assistant, personal chef, a few nannies and an on-call masseuse. Instead, my life takes place in a crowded, unkempt home, filled to the brim with my three kids, two dogs, 25 fish, and half a dozen reptiles. Add to that a challenging job, low funds and no help, and you get one woman's recipe for discontent. It's nothing like the hand-to-mouth existence I knew growing up, but somehow, it's still not enough.

On this particular day, walking through our local village, burdened with Rite-Aid plastic shame-bags (I never bring my own), I look up and see that Playboy ad, and am hit with my own tsunami wave of memory, dissatisfaction, and grief. Naturally, my immediate impulse is to call my mom.

After our usual back-and-forth -- my litany of complaint, her rant about the struggles of her own, troubled years of parenthood -- I change the subject.

“Did you know they are making a series out of the Playboy Club?”

“Oh, I saw. They play ads on TV all day. It’s the 'Mad Men' syndrome. Anything from that period surely has to be interesting. I think there is one about Pan Am stewardesses too. I applied there as well, but they didn’t think I was tall enough.”

Abruptly, my thoughts adjust. I look around the village, taking in the "Playboy Club" ad and more, and see that I am blessed, even though it's hard to remember that sometimes. I'll never have to jiggle my boobs and wear a bunny tail to make money -- or work in a factory, or clean toilets -- even though my mother accepted these jobs as a matter of course. Despite her unique style of child-rearing, I realize, my mother paved the way for me as best she could.
Posted by Rhonda Talbot at 7:12 PM