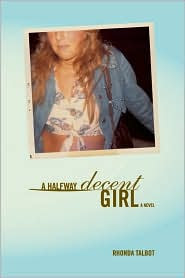 Jean has a problem. Her mother wants to leave precisely at midnight to take off for the fabled riches of California, and Jean wants to lose her virginity first. She does, with Bill the hood, who makes her weak and points out the star Polaris and tells her she's his girl. That's about all Jean has to hold on to as Daisy drives across country in a white Cadillac she's supposed to deliver in San Francisco.

Jean knows nothing much will change: her mother will pass hot checks, pick up men, and mean every word of the promises Jean knows won't come true. En route Jean encounters a lecherous truck driver who sings along to Barbra Streisand and an equally lecherous judge in a motel room at Lake Tahoe. Before this engaging and sometimes heart-breaking novel comes to an end, Jean will live with her mother in a Sausalito apartment redolent of sewer fumes, find an unlikely friend in a married man, go back to Michigan for Christmas (her present is an abortion paid for by her still brutal, newly devout remarried father), and return again to Sausalito. Of course, Daisy isn't waiting for her at the airport, but with the help of an almost albino taxi driver Jean finds her mother in a bar, as usual. More important, she is able to see that she's a halfway decent girl after all and that maybe, just maybe, the sensible luck that has kept her alive will offer her a chance at life.

This was one of reviews I had not seen, I'm sure there are others... but this pretty much nailed it, so thanks, anonymous.... 5-star person.

Jammed with wildly appropriate language hungry readers can chew in gratitude. A page-turner, filled to the brim with the challenges faced by today's young adults. Anger, dissolution, and vulnerability place Talbot's heroine, Jeannie on a tight-rope, balanced intellectually somewhere between childhood remnants of compromised saints, her mother's narcissism, and her father's bitter misogyny. The divorce of her parents and remarriage by her father have only achieved a duplicate step-family of terrorized children, one of whom is her real sister, Clara, drug-addicted and doomed, but whom Jeannie imagines she may save. Jeannie stashes the brief mementos of her ten-minute childhood in a battered, blue suitcase and travels with her barely sane mother across the country to California, lured by her promises and airy dreams of sophisticated and better men, only to find herself pulled out of Detroit's crime-ridden gutters into the more subtle dangers of Marin County. Jeannie is plagued with guilt, having abandoned her sister, and living in serious disappointment at the edges of drug-infested Sausalito. Talbot has complete control of her characters, describing them in whipping dialogue, rushing intensity, stopping only for an occasional touching act of extreme poignancy, while we grasp, crying and laughing, for another box of tissues. 'A Halfway Decent Girl' gives voice to the endemic millions of young adults suffering low-esteem, made vulnerable to every conceivable life-threatening mistake, by the irresponsible and cruel behavior of the adults whose job it is to protect them. Jeannie is brave and witty and honest. Falling out of grace temps-se-temps, to test the results, to invent the wheel, only to discover the wheel is cast in stone, and it is Jeannie herself, if she is to survive, who must be re-invented.
Posted by Rhonda Talbot at 2:35 PM