I’ve been hearing all kinds of fun goings-on at Coachella so decided to join in. I’d never been to these post digital rock-me-silly musical events, though had my fare share of grassy knoll concerts as a teen where we would sit in the grass, drink warm beer, swoon with Led Zeppelin in blue jean/T-shirt attire.

Nowadays, I’ve learned that in addition to more than just one band, there might be, say 50, as well as human fire eaters, trapezes artists, séances, people sticking pins in their eyes, yoga classes, and apparently lots of light effects and various shaman leading people into mud rolls.

Also there are surprise musical guests. It might Bono or Bozzo. I know this because I read. Though Coachella may be the big kahuna, these newfangled outdoor events happen all year round. The Eclectic Light Orchestra featuring some girl named Daisy, Purple Haze Sky Festival, New Age meets Old Age Extravaganza, Burning Man, just to name a few.


Being the adventurer I am, when I heard the Black Keys were playing that cinched the deal. I loved this new band I had recently heard on my car radio, until I discovered in fact they had something like eight records out already, but hey, they were new to me, so fuck it. After scanning the list, of course I recognized Radio Head and Mazzy Star. I saw Dear Hunter and Oberhofer so now my curiosity peeked to a new high. Oberhofer? Really?

I also knew people wore all kinds of get ups, so I rooted through my kids costume box, pulled out striped tights, a pink tutu, various head wraps, tiaras, three wigs, then found a pair of platforms I bought once for one of those silly “It’s a 70’s themed party” things. I actually didn’t go but still had the lame ass shoes.

Doing my face in war paint would not be an issue since my kids had plenty, typically reserved for Halloween. 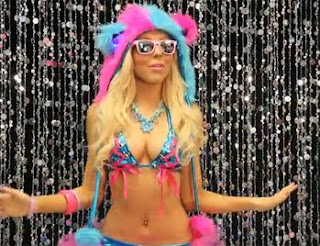 Knowing these events could last up to four days, I brought my daughters Snow White sleeping bag, a flashlight and some Mars bars, just in case the experience proved everything it promised.

Off I went after googling Coachella, seemed a straight shot down Highway 10. I don’t use navigational systems after my disastrous first attempt a few years back. Punching in the address took more time than looking at a damn map, not to mention I loathe the robotic woman telling me what to do.

“Fuck off bitch, shut the fuck up ho bag.” She continues on. I was going approximately eight miles, I know because I had been to this house before, but it did involved freeways and that’s where I can get confused in L.A. This robot sent me to Tijuana. I’m certain out of spite because I called her a whore, bitch and eventually cunt. I didn’t cross the border, but never used the system again. 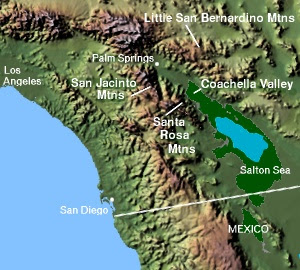 Off I roar in my little car, expecting heavy traffic but it wasn’t too bad. I left at 5am just to be safe.

And there is the sign, COACHELLA. HA, trust your instincts. Dumb NVS. I was there in two hours. The show probably hadn’t start yet.

I pulled into what I can only call a deserted junkyard. As I got closer, I noticed the place was huge and fenced in. That seemed smart. Keep out the people that didn’t buy tickets. I paid 250 for mine. My car was hitting all kinds of rocks, mud pits, and it smelled liked shit frankly. Had I missed it? 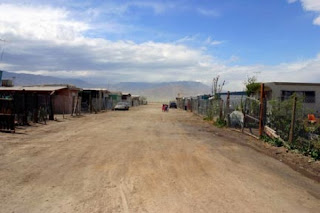 Then rows and rows of dilapidated trailers, in fact it was a gigantic trailer park. I got excited. So the musicians play in a trailer to a small crowd, how intimate. How smart. I could literally sit next to say, Keith Richards. 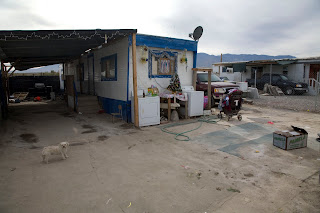 I couldn’t wait for the festivities to start. I didn’t see any food stands or even tents. Maybe they hadn’t arrived yet. It was still only 7am. But I did hear a lot of dogs barking and babies crying. Pretty soon younger kids started pouring out of the trailers carrying rags and sticks, hopefully to fix that shit smell. I figured they were the set up crew. These concerts were total game changers. They had better move fast or there is no way the Black Keys will come.

They headed toward the mud puddle probably to use their sticks to remove the poop. Poopsticks would actually be a great name for a band. I made a mental note.


“Hey, guys, anyone know when the concert starts. Never been to these newfangled concerts before so I’m a little rusty on the details.”

I noticed a few teenage boys leaning against the fence smoking cigarette butts . They looked ragged but hip in a sinister way.

“Guys, help me out here, where is Elton John?”

“Lady, this ain’t the Coachella you looking for.”

“A toxic mecca. I tell you more for money.”

I shelled out 50 bucks. They all started laughing and talking, probably about my crazy wig and tutu, but I liked them. All filthy, but sweet and could speak some English. That was worth actually 100.

“Okay lady, this is a reservation camp for ingine people P’urhepecha. We always lived here.”

I deducted he meant indigenous and they were a Native American tribe held in what looked like a concentration camp. I looked more closely at these trailers, old, built out of dilapidated plywood and random metal. Over the fence was a toxic dump, thus the shit smell.

“We no have water, plumbing, but we drink a lot of arsenic. You want to buy some drugs? It’s black tar.”

The other piped in, “We have PCP and LSD too. Good for festival.”

I am way out of the drug loop but I bought it.

“Why do you drink arsenic?”

That is when I noticed these women were bathing kids and washing clothes in what only could be described as a huge mud pit filled with poison.

I bought all their drugs.


“Apparently Coachella is a pretty big place. Thanks boys.”

I eventually reached the actual Coachella concert. The cars were lined up for miles in stopped traffic and people dressed kind of like me were on foot.

I parked on the opposite side; then scanned the vehicles, settling upon a new manly Porsche. I rapped on the dude’s window. He was in his late 50’s, Jerry Garcia but shaven. His passenger was a 20-something model type covered in body paint, her nipples shaped like bulls-eyes. 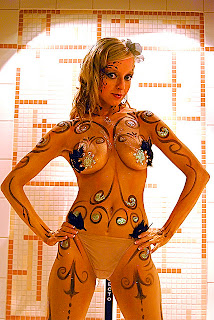 “Do you know where I can scalp a great ticket?”

“Fuck yeah!” the girl said, taking a swig of tequila. “I don’t have one, but my baby does.” She sidled up to her grandfather.

“A thousand dollars. But it’s backstage, and I heard Oberhofer is really Jack White.”

“I also have um, PCP, heroin, TFQ and a few other pharmaceuticals.”

I gave him my ticket and all the shit the kid gave me and headed back to the concentration camp.

Luckily there was a mega grocery store on the way, so I loaded up on fresh water, canned food, barrels of fruit, toothpaste, toilet paper, steaks, and People magazine. That was for me.

Back at the reservation, we formed a chain to pass out the goodies. There were tears, many of the residents or inmates, thought I was the mother of Jesus. Fine. I couldn’t understand anything except the occasional “Mary!” 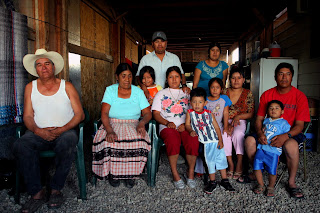 I know it was just one day of small relief, but I have a feeling this surpassed the whole fire eating, pins in my eye, fake shaman thing. It’s funny where your instincts take you without a navigational system.
Posted by Rhonda Talbot at 7:49 AM