I heard this song today and as music often does, I was transported back in time, that moment so clear in my memory, down to the shirt I wore, saying goodbye to the boy I had fallen in love with at 15. He was my first love, and though I never saw him again, I can still recall every detail of every moment we spent together. 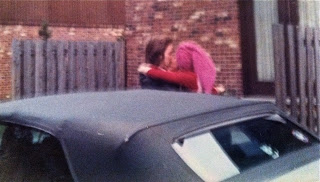 Whether it was roaming (okay, loitering) around Cranbrook at 2:00am, or my getting baked in a bikini at Cass Lake or drinking Molson's on the hood of his car at some old drive-in or going to one of many concerts; Led Zeppelin, Bob Seger, Rolling Stones, Eric Clapton or Rod Stewart. But somehow this became our song.^^

My mother decided it was time to leave Michigan, never explained to me beyond, "We're going to a place we will be understood. California." The photo above was the last time I saw him.

I had no desire to go West, no matter how hard she tried to sell it with over-the-top descriptions of coconut trees, tree-top homes that overlooked the Pacific, my new school that sat high and proud on the base of a mountain in Marin.

It was unbearable to leave Bill, and all my other friends I had cultivated after having moved 12 times up until this point. This was home. Finally.

But leave we did. I hated California immediately, could not identify with the kids, the way they always smiled, how they wore socks with sandals and said things like, "I'm so stoked it's sunny, beach time! Whoa, dude!"

Coming from Detroit, this was just plain embarrassing to be around. I isolated and instead hung out with the male teachers or older men that would pick me up hitch hiking, which I did out of sheer boredom.

Though I had no interest in drugs and was a straight- A student, a few months of Marin County living, I found myself hanging around 35-year olds who just thought I was spectacular.

"For 15, you're so awesome! Come out with us tonight. Have you been to Berkeley yet?"

Soon I found myself in this situation. 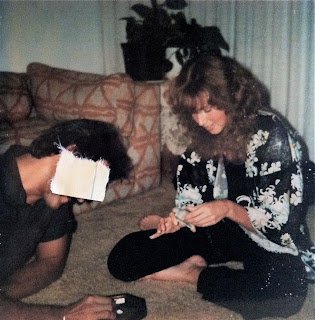 I hated my life, soon hated my mother, who also was changing. She became an alcoholic, yacht club floozy who dove off of boats just for fun.

"Honey, come out with me tonight, let's go get drunk." She needed a drinking buddy, and I did that for a few weeks, mostly to keep an eye on her, but quickly grew sick of Long Island Tea, and grew tired of bailing her out of the local drunk tank.

Six months after we landed in Marin, I emancipated myself, got my own apartment, switched High Schools, took classes at the Community College, got a job, bought a car, and was soon back up to straight A's, then left for college.

Rod Stewart continued to remain a theme, because in college, this song was popular.


Not that I didn't love other musicians, but for whatever reason, he was an integral part of my coming-into-adulthood. I owned lots of vinyl but chances are I played his albums the most. Then it all ended and I was over Rod. He went into a musical direction I could no longer connect to.

It would be years before I fell in love like that again, despite a number of boyfriends, but I couldn't tell you the song track of that affair.  But first loves are like that. The details are so vivid they are etched inside for a lifetime.

Posted by Rhonda Talbot at 2:46 PM