Growing up in Detroit in the late 70's was an incredible experience. Most of which I took for granted. As a kid, we were not only raised on Motown but when Rock N Roll hit the scene, we seemed to be in the middle of it all.

Segar must have been a friend of my mom's as she hung out at various clubs, the same clubs I would later go to, the Palladium, Fillmore, Grande Ballroom and of course Cobo Hall where I saw every rock band seemingly that ever stepped foot on a stage.

I barely remember Segar, except he was soft spoken, had a lot of facial hair and was funny. He made a point to tell me and my four sisters to stay close as possible to music. I wasn't sure what he meant, and I also had no idea who he was. Yet he taught me how to play cards. Poker.

We didn't see much of him, three times?

Cut to many years later, at age 11 I started venturing out to the rock clubs, indoor and out. Bands played everywhere, any field where you could put up a working amp would do.  My older sisters dragged me along and we would see J. Giles, Iggy Pop (or then known as Iggy and the Stooges) Ted Nugent, Grand Funk Railroad, Alice Cooper, Humble Pie, MC5, Spirit, Glen Fry for god sakes.  Then we typically would go back stage and have a beer. Nothing more than that.

Later still, when I was old enough to run around on my own, my best friend and I would hitchhike wherever the music played. And a bunch of times, there would be Bob Segar. He looked different, but I loved his music, then and forever.

As time passes, and I get to be 14 and 15, by now I have seen everyone worth noting at that time.

Concerts were a free for all, unlike today where it seems impossible to gain entrance. We never had tickets. Yet we saw Led Zeppelin, at least five times, Elton John, Davie Bowie (who always had parties after the concert and we always went,) Earth Wind and Fire, Eric Clapton, Allman Brothers, Peter Frampton, Deep Purple, Joe Walsh, Joe Cocker... well it's an endless list.

What is further confounding is often times many of these incredible musicians played on the same roster, particularly in Ann Arbor, the "hippy" haven.

Looking back, of course, I wish I had taken pictures. We were not groupies, we just loved music and loved the musicians, as artists. They shaped our young lives and often times got us through very bad times.

I found this photo (still renovating) and remember this night like it was yesterday. We went to see Spirit whenever they played in town. In fact, we had one of their phone numbers, I think Mark Andes, and my friend was simply fascinated that the lead singer's name was Randy California; as she was obsessed with all things California. She fell madly in love with him, all 15 girly crush years of her. Randy gave my friend his drumsticks. 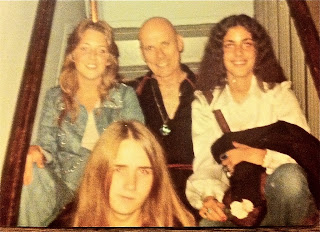 Ed Cassidy is pictured,  can't remember the guy in front but also in Spirit band.  Randy is taking the picture. 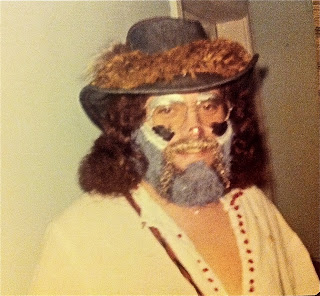 I would see Bob Segar again, and exchange quick hellos, but he remembered me and at age 14, that is huge. I looked very different, and so did he. But he still embodied that soft-spoken kindness.

My gal friend in the photo is still my closest friend and we still bond over music. Though years have passed and our lives have both gone through at least eight mutations, we remain exactly the same people.  This was our favorite Spirit song.

http://www.youtube.com/watch?v=GjN8PdaoFaQ    Randy was an amazing man.
Posted by Rhonda Talbot at 12:26 PM