Mermaids, The Black Keys and Salamanders


This is Day Five, Hike Five of our venturing into the deep mountains in search of the great almighty salamander. Though we have found a few snakes, one towel, and a plastic bag, today we feel lucky.

On the drive out, this time we took along their older brother who loves to hike, but primarily goes because you never know what hottie might be on the trail. But given  he was texting half way up the mountain, he would've missed her anyway. 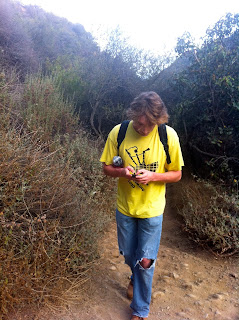 The trip out there is already an adventure because everyone fights over music. All of our tastes range widely from the Rolling Stones to Selena Gomez to Heart to Edward Sharpe to Lucinda Williams to The Black Keys to Agni (son's band) and back again. We ended up listening to an entire rage, everyone is pumped up. The girls particularly love one song from Agni so we play that five times.


Apropos of nothing, A:


The girls fall into a fit of hysteria.  I  have no idea what the joke means, but it made me smile, only because on some level this involves Johnny Depp, Clint Eastwood, and Chinatown.

We arrive, my kids all run back to car as they forgot their "gear."  I go forward and some odd looking guy, around 19?, is standing in the middle of the path, starring at me. He doesn't stop, bordering on freaky.

"Can I help you?"
He looks like a very young Mr. Potato Head. 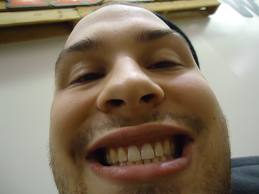 Here, I couldn't figure out what he wanted. Did he want me to join him? Was that the etiquette at this particular hiking spot?

My kids start to appear over the small hill, walking toward me.

I seriously wondered about this guy now. Alan? Random Alan?

Then he seemed to evaporate into thin air and I then wondered if  I imagined the entire ordeal. 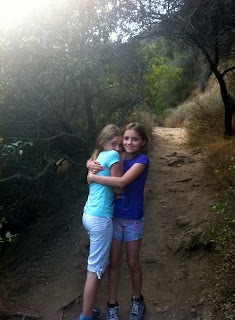 Here we are heading up. The girls just saw the rattlesnake sign. We did actually see one, but I told them them for the most part they hang out in this old Blair Witch building and play cards. 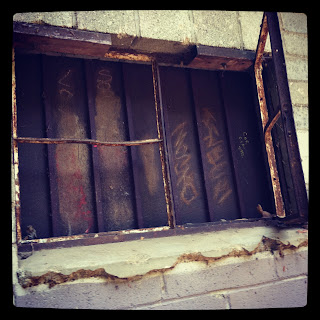 They shake their heads in unison, as if to agree, "Why are we stuck with such a freak for a mom?"

Oddly, as they continued their scramble upon learning there was a waterfall and plenty of frog activity ahead.... 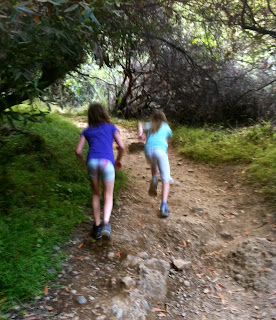 ... my son told me this. "All those years you embarrassed me as a kid actually helped me and I don't think I ever actually thanked you properly."

"What? Really. Like when I did squats down the street holding an umbrella type thing?"
"Yeah, but even when you just called my name in a crowd. I didn't answer for a reason. I was horrified. But in college, my dorm mate admired how absolutely nothing embarrasses me or makes me feel self- conscious.  And I like that quality."

We dashed up the mountain and they indeed found a babbling brook.  The waterfall wasn't much further, but this was why they came.

"Mom, the falls are too deep. This is where salamanders and frogs live."

"But not mermaids?" my son shouts.

E, "Yunno, not sure I really want a mermaid anyway. How do you even take care of them?"
A nods in agreement. 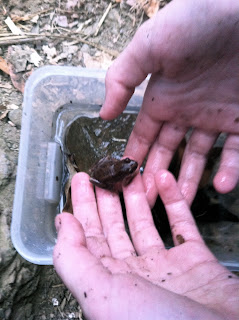 Their commentary.  Hike Six is tomorrow. The Grand Grotto. This is a more difficult hike, but worth it. After climbing boulders, you can jump into a lake. Not that I would do it, but I might.


One of the great things about hiking with kids is to see how excited they get about worms, frogs, salamanders and other creatures that make me gag.

Let them speak for themselves, they were about to say, "Mom, yunno.. you're just wrong on everything"

But I love to see their enjoyment, like the exercise and come across amazing copy from passerby's.

Two 40ish women in tight clothes and small tops. "At the end of the day though, it's all good, even though you can be totally maxed out."  Friend, "Right? Totally."