My Scarlet Letter and Neil LaBute 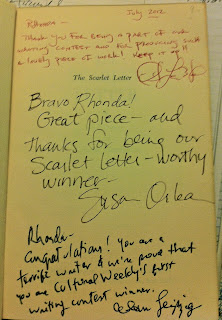 I won this prize, it's always a great feeling to be acknowledged  particularly when they are Susan Orlean, Neil LaBute and Adam Leipzig.. this is my signed rare copy of The Scarlet Letter. It's a beautiful book to put on my shelf.  Thanks guys, made my day.  Here is story from Cultural Weekly...

A challenge from Neil LaBute re Scarlet Letter.    You can also see, once clicking on link, Neil LaBute's story.  I took the challenge because, well, as in my story, we all know it's not uncommon to develop a mad warped crush on a married professor. 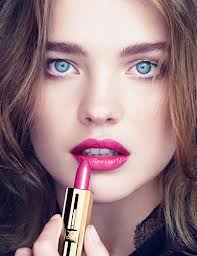 I won't say if this story carries great personal truth, but will say I did invest in lipstick for the first time in my life as a college freshman. :)


It was writer/director Neil LaBute’s idea.  “Why don’t I write a story, and Cultural Weekly can do a writing contest?” he asked.
The rules were simple: No more than 1,000 words, and it must contain a character or element from Neil’s original story.
I asked New Yorker writer Susan Orlean to join Neil and me as judges, and the contest was on.  We received 38 entries from four countries, most of which showed wit and originality. Last weekend, Neil, Susan and I met by conference call, with Neil in Spain, Susan in New York and me in Los Angeles.  We’d read the submissions anonymously (they had been assigned numbers), and we agreed that the best entry was Number 4.  We liked the author’s voice, and the surefootedness of the ending.
Rhonda Talbot, the winning author, will receive her prize shortly – a used copy of The Scarlet Letter, inscribed by Neil, Susan and me, singing her praises.  Congratulations, Rhonda!
–    Adam Leipzig

About Ten Minutes
By Rhonda Talbot
Carla didn’t realize she was fat until she arrived in San Diego. Having sped down the freeway in her Mini Cooper from San Francisco in one day, she was eager to start college and put her abysmal high school years behind her. She felt the kids were sub-human with their shiny faces, Birkenstocks and optimistic outlook on life.
She despised her mother as well, the town whore.
It was not unusual, for example, for her alcohol- fueled mother to dance naked on a 40 foot Schooner before swan diving into the icy bay just for fun.
Carla was pleased with the campus’ seaside charm that overlooked rolling green hills but instantly deducted her “peers” were beneath her. It was Redwood High redux, but with Frisbees and volleyballs.
Settling into the Filmmaking One course Carla realized she had made an excellent decision in her college preferences.
Her professor, “Call me Jack, not Mr. Kowalski,” was in his thirties, with deep set, dark eyes, olive skin, and an athlete’s body. He reminded her Javier Bardem without the accent. Carla was in love before she had read the class syllabus.
Clearly she was not alone in her assessment. Looking around the sun-drenched room all of the girls seemed prisoner to Cupid, gaping at Jack, some drooling. Most of the girls were mannequin thin, with hard bodies, perky butts, and big tits. They wore skinny jeans and push up bras.
Carla had good features and a decent body that might draw out of pedestrian whistle, possibly in Ohio. She could not compete with these Barbie’s.
She knew she would have to lean on her shrewd instincts and intellect to capture this prized professor.
After class, her diet consisting of boiled eggs and birdseed. Carla joined a running clinic and ran 15 miles a day, all the while envisioning her awesome life with Jack reading haughty literature and baking cookies.
By the end of two weeks she was down to 100 lbs.  She was ready.
After class she followed Jack to his office.
I’m almost finished with my short. Would you have a look?
Um, sure
I get A’s in all my classes and maintain a 4.0. Always have.
Good for you.
The professor watched, intrigued, a finger to his temple. Carla sat next to him in a folding chair, wearing her new Wonder bra.
It’s called Easy Money, Stupid Men. It runs about ten minutes.
Okay. You play poker?
Yes. Easy money.
Where did you shoot this?
Some poker dive downtown.
We should write a script about that. It’s brilliant.
It is? What is?
A destitute but clever girl struggling to get through college by beating the odds. I can see the whole thing.
Interesting.
Can you begin coming to my house on the weekends to start?
Why should we wait? We can have sex right now.
What?  Carla I’m married. That won’t happen.
Carla scoffed, but went along with it. She spent a number of weekends at Jack’s house, a track home, not a summer beach house. His wife Eloise was a colossal bore. She was always happy and she was stupid, therefore Carla loathed her on two counts.
They worked nonstop, Carla hovering over Jacks’ shoulder spewing dialogue, while breathing in his intoxicating essence of man sweat and caramel.
On breaks, he would force her to listen to Fur Elise over and over. It was the only song Eloise could play on their piano. It was torturous.
As they neared the end of the screenplay, the three stood in the kitchen eating dried mango and drinking Pom.
Carla, Eloise and I want to make love to you.
Eloise?
Kiss my wife.
Carla balked, but after some Jack Daniels they were all lying on a soft white comforter.
Jack and Eloise were having loud sex.
Carla held down bile, her eyes drifted, then settled on a disturbing image of what could only be an etching of Eloise’s vagina tacked on the wall.
You are going to be famous, Jack grunted.
Give me that banana, daddy! Eloise cried.
Carla lay there motionless. Banana? Oh daddy?
Carla’s role in this ménage was unclear.  She reached for the TV remote then Jack was on top of her, thrusting. It was then she realized how small she had become because she feared for her life. She was being crushed to death.
Don’t cum in her! Don’t cum in her! Eloise kept repeating, panicked.
He jumped off, back onto Eloise and the sex fiasco was quickly over.
They finished the script on campus and did not return to his house.
At the end of the semester he gave her a B.
Carla stomped into his office.
What the hell is this? You know I am the best student.
The screenplay didn’t sell.
So!  Give me my A or I tell your department head.
It’s too late.
Did I mention I was 16?
I don’t believe you.
Yeah, as in jail time. You decide. Then who will suck your banana? Daddy?
Carla played poker that night and thought about her odds. She decided they were in her favor. She won two thousand dollars.
Back in her dorm, she went on line to check the year-end semester report. All A’s.
Carla was pleased, but not satisfied. She had sold herself cheap. Did she really have a threesome with this professor who now looked nothing like Javier Bardem?
The next day she told the department head everything, the booze, the Pom and her needless suffering of having to listen to hours of poorly played Fur Elise.
Then came a flurry of questions, did she want to press charges, had she contacted the authorities, etc. Carla wanted no fuss and said as much. In fact she just wanted to eat.
She sat in the campus diner a few nights later carving into a 16 oz. Rib Eye, then noticed the school paper.  “Tenured professor ankles post to pursue his long held ambitions as a screenwriter in Hollywood.”