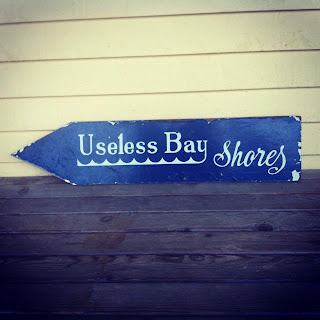 Not sure this is what Captain Vancouver had in mind when he named this part of Whidbey Island useless. The shore is quite shallow, so when his ship anchored there was a decent tide, thus his crew got their grog on. Upon return the ship was stuck in the mud, pieces of waterlogged wood tossed about the beach. He flogged the crew for their incompetence then put up this sign. Nonetheless, it's a great tourist spot because you can sit on the beach and see the Seattle skyline.

When the landslide hit yesterday, because there is constant erosion in this area, it was business as usual.  In fact, the sunset was particularly gorgeous that evening. But others did not fare as well, tragic all around.  Though no one died, 35 homes did fall into the bay. 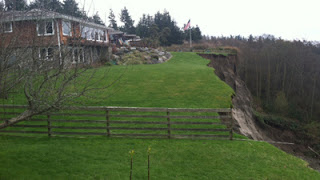 This backyard extended at least two football fields, with steps down to the bay. The garden is gone too.

A year after my mother died, I traveled to Whidbey Island to claim her remains. I wasn't able to spend the last few weeks with her because she refused to see me, or anyone in the family. She had stage 4 lung cancer and though I was unaware, she only had a few weeks to live. I called every day mining for information.

Me: Mom, you sound really ill. What's going on?
Mom: Oh, nothing. I might have a spot of cancer in the lungs. Don't get hysterical.
Me: I'm not hysterical. What does that mean?
Mom: It means nothing. I'm fine.

Then she would hang up. Many times not pick up the phone.  It became so frustrating I called the local sheriff to have him check on her. Well, my mother did not in any way appreciate this.

Mom:  You are never to call or come  here ever. Don't even try.
Me: Mom, I was scared. I thought something was wrong.

She slammed down the phone. Our relationship was complicated.

It's not like I ever listened to my mother in the past, so my favorite sister Beth and I planned a trip to the  beautiful San Jauns. I had not seen my mom in years but she did me a huge kindness. After the twins were born, despite all the help I had, she moved in with me and there would never be a way to repay her.

The first year was so difficult. My mom got me through. I needed a mother like my babies needed a mother. She knew that. I needed her. We are not touchy, fuzzy mom/daughter, but we know what matters. She kept me propped up so I could be a great mom to the babies. 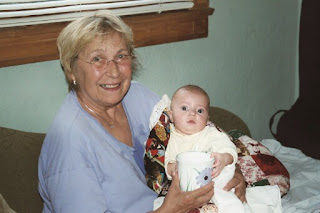 My mother was 70, always upbeat, had a great life of on Whidbey; full of writing, painting and had just received her PhD in literature. She seemed happy and content for the first time in years. She had quit  smoking, drinking, lost weight and was taking care of herself.

But she was adamant about our not coming  up. Though I wrote PS MOM IS DEAD out of anger, the truth is I loved my mom and would have loved to share her last hours. And I miss her dearly.

I had this urgent need to claim her remains, but she had written in her will they were to go to some anonymous cemetery hill in Seattle and no one was to touch them.

Another sister, the youngest,  was the executor of this will. This sister, Diane, unbeknownst to any of us, had been living with my mother for months acting as nurse, dealing with doctors,  hospice workers, end of life issues such as bills and taxes and funereal arrangements. She never felt it necessary to fill in my mother's other five kids that Judy was dying.  I finally had to let it all go.

Until I received an email from the cremation guy who told me the ashes embargo had been lifted and I could come get the remains.

So off we went. Beth flew in from Michigan and we met in at the Seattle airport. Our reunion was enough to have validated the entire trip. We had not seen one another for ten years plus.  We had such fun even if we did get lost looking for the cremation guy whose office was located off the beaten path sandwiched between a pawn shop and a 7-11.

Cremation guy was a portly man who must have been lonely because he talked for what seemed hours, about his life, his deceased wife, his business partner, his grown children and many grandchildren.

He finally handed over a black box, the size and weight of a large bag of all purpose flour. 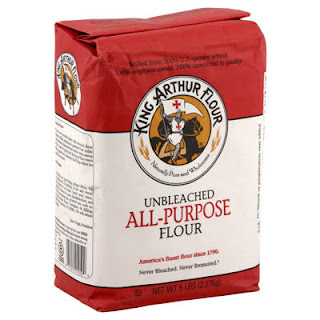 I hadn't been to Puget Sound in a while so forgot it takes about 2 hours just to get to the ferry. But we had so much to talk about. Her eight kids, why in the world I decided to have two more. Our father.

Me: How's dad?
Beth: Same.
Me: It was nice he got all your kids braces. I mean that's one good thing he did as a person.
Beth: What? Who told you that? He didn't get anyone braces.
Me: God, he is such a liar. He told me he took care of all your kids teeth. Then he asked if I would send him Ann Coulters new book.
Beth: Gross.
Me: Well, I have to say I found it shocking he's dating a black woman. I mean, he is so racist!
Beth: I know. Strange.

We had a great time in Langley and stayed in this beautiful B&B. The owner made scones, brought us cookies and we watched 13 Going on 30. 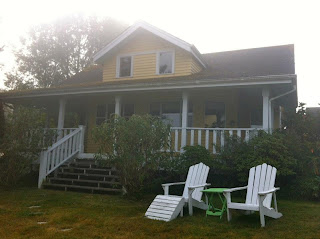 Beth: So, should we call Diane?
Me: We have to. I mean, how weird. She's like a block away.
Beth: What do we say? We happen to be on Whidbey?
Me: I bet she knows we're here. Anyway who cares. Maybe she needs us. Without mom, she must be a wreck. 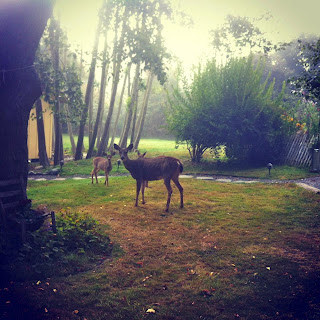 Diane never  had a family, or even a steady significant other. Or a job. She depended on my mother her entire life, using up that youngest born card.

First we did a drive by to see my moms little white house. Then we knocked on the door. Diane was so happy to see us. She was so very lonely, but incredibly chipper. Too chipper for me. We got the whole sad story of my mother's final days. The infusion of pain medication in her mouth, her inability to move, hospice workers tending to her around the clock. Diane held her hand until her last breath.

It was extremely difficult to hear what actually happened and how ill my mother was. But Diane's vivid retelling helped unlock my ability to finally grieve. Later.

Right now, we needed to go on a road trip and see beautiful things. 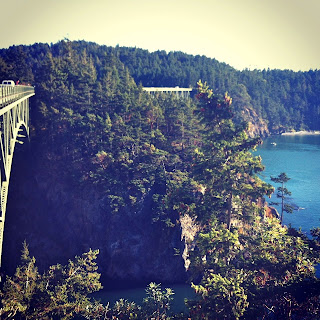 Meanwhile, as we drove around the island,  my mother was in the trunk in a black box.

Finally it was time for us to leave. Diane was sad but no less chipper. This may have been grief or medication, I have no idea.

We returned to our lovely yellow house and had business to attend to.

Me: We have to go to the shore and dump her ashes.
Beth: I know.. but isn't that illegal?
Me:  No. People do it all the time.
Beth: But usually they are in a boat.

We head out there and the tide was in. So basically there was one inch of land to stand in. We also went at night. Except for the moon there was no light. And I have night blindess so thank god I didn't drown. 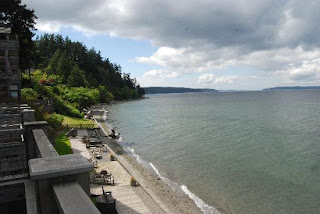 I tried to open the box but it was sealed so tight this became an impossible task. I was stabbing the thing with my keys, kicking the box with my boot. Beth was horrified and hiding behind some drift wood.

Finally I got it opened only to find more difficult wrapping. The ashes were a very dense floury substance, the wrapping again needed key prodding so I basically just tore a hole in the side of the bag. It wasn't like I neatly poured the ashes into still water. I was now just dumping and throwing, kind of manically. Like clowns in a small car, the ashes just wouldn't stop flowing out.  I wanted it over with.

Me:  Just go mom. Get out. This is where you belong. You love the shore line. The rocky shore line. You would hate being with anonymous people on a random hill because you hated people!

The thick flour just sat in the water, so I used my hands and boots to try and spread it around. Beth had her eye on the town hovering above us looking out for cops. (Like this town even had any.)

It took forever, then I found myself completely surrounded with powder. Her ghost was all around me, climbing  up my boots, into my socks and all over my jeans. I was soaked. I kicked her around some more. 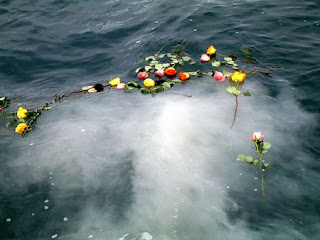 Me: Get out of here. Go out to the sea! Why did I even bother with those flowers!

We left the cloud and destroyed all the evidence, and tossed the box and paper in a dumpster a few blocks away.

Me: The tide will come in and all the white crap will be gone. I need to shower.
Beth: I feel sick. Just gross.

Yet, we couldn't help but laugh. It all seemed so insane. We had grown up with this woman, who cared more about being on the damn ocean than cooking us dinner. Not that we faulted her. I was trying to give her what she wanted.

So today, 4 months later, I get a text from Beth about the landslide. 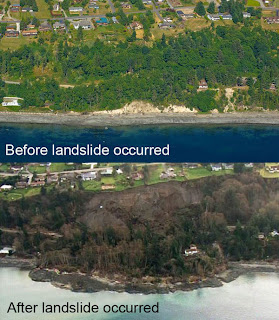 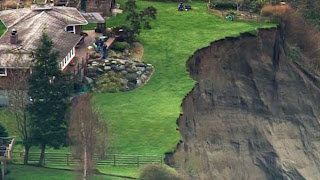 "OMG! She's unleashing her wrath! She's still so toxic! She won't go away!"

Of course this was meant to be in humor, but to me and Beth it felt like more of the same. A haunting from the other side.

Posted by Rhonda Talbot at 2:34 PM