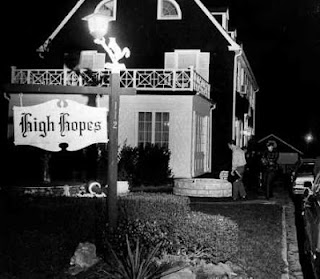 We have to vacate our home for a few months for some massive Money Pit kind of construction but without the studio financing. At first it seemed reasonable, then daunting, then simply impossible. But before this would turn into The Amityville Horror show, I saw an opportunity to unload. After all it is spring.

First was the initial dash and trash. My rule of thumb: if I havent used, worn, or remembered said object, out it went. Then, being a bit obsessive, I thought, well, I hate that sofa, and my desk, and that chair too. And those fucking night stands. You get the idea.

After giving most of it away, and one day left before we had to leave, we reverted to our Midwestern roots and had an "estate" sale.  Every table, chair, toy, basketball and book was vintage.

Yard sale is really fancy talk for house vomit. We've all seen them and one often has to avert their eyes. Ours was more like this. 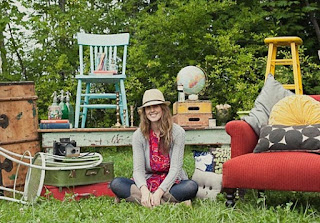 Mark kept telling me to wear a loose top and sit outside to attract customers. I thought this was seriously oddball. But on a rare occasion he's right, so I sat under the shady elm and read The Great Gatsby, a movie I had otherwise planned to see that day. I don't get any props for shout outs, but it would make me happy for this film to do well because I like all involved. Carey Mulligan's face makes me spontaneously bust into tears.


It was Mother's Day, but in my house I pretty much do what I want whenever I want, so it doesn't hold much meaning. Except for the children who put a lot of thought and effort into their plans. Cards, candles, home made muffins, and then this cute thing Eve crafted during the sale. Haven't a clue where she found wildflowers. 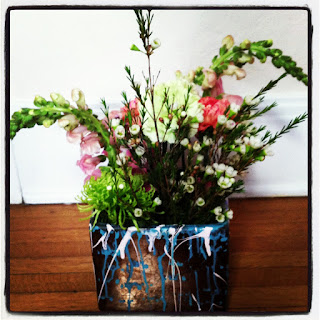 People came. Many. There was the creepy door knocker guy from Poltergeist. He's all bones and black capes. I swear it was him. Kids, if you haven't seen this film, it's worth it. And read the history too.

I need to make a shout out to Michael Grais, the writer of Poltergeist,  because, well, he's awesome.

Also this remains one of my all time favorite haunted house movies.

As another aside, I love Leonardo DeCaprio and have seen every movie he's been in including The Beach, which I still have no idea what it was about, like Club Med on steroids or something. But I also love his friendship with Tobey Maguire. Look how cute. 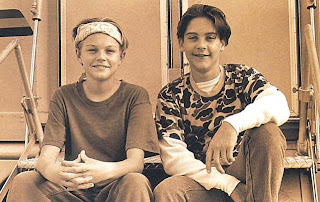 Given their ragtag shitty apartment upbringings, not unlike my own, I have a lot of respect for both of them.  They did not come to my vintage sale.   I wonder if Leo remembers me. We met at Golds gym once years ago. He asked me where the towels were. 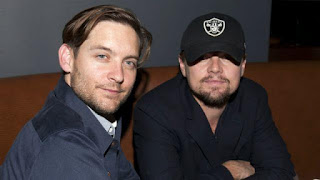 Back to Mr. Poltergeist. He keeps pulling out a fat wad of fake Monopoly money. He sits down next to me on my private bench! 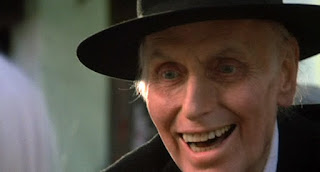 Poltergeist:  So, you have any silver, gold? I have a lot of money. (Flashes the Monopoly bills.) But we have to keep this secret. I buy a lot of things.
Me:  Everything for sale is on the lawn. I don't have any gold for sale.
Poltergeist: Jewelry? You must have some in the house there.
Me: Nope. I hate jewelry. I don't even have gold fillings. They're all porcelain.

He got up and left but I was told he came back three more times when I was inside, still inquiring about gold. He was about to approach my ten-year old daughter and her dad chased him off the property.


Halfway through both the book and the sale, a small beat-up car pulled up.  A young woman in a nurses outfit walked over to me.

Nurse: I have Marilyn Monroe in the car. She saw the TV for sale. She's not well, and we need to keep it quiet. No cameras.

What the hay? But after Poltergeist Man, I'm  thinking so this is where the freaks go. Yard sales. They must get day passes. I love Marilyn Monroe. Could be interesting. 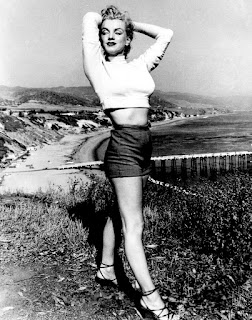 Nurse: I rarely bring her out, but she's had a lot of surgery and needed some air. But again, no autographs.
Me: Of course. Of course. No worries. We are very discreet.


A very old, yet elegant woman was helped out of the Rambler? by her nurse.  She hobbled over to me and asked if she could sit down and would I get her some water. Okay. I got her some aspirin too. She reminded me of Gloria Stuart in her Titanic role. May she rest in peace. 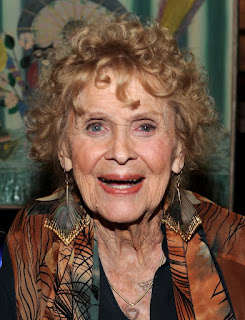 We were sitting on the bench, under the elm, while her nurse caressed the TV.

Me: Nice to meet you.
Marilyn: It's just so hot. I recently had surgery. I live in constant pain.
Me: Oh, I'm sorry. What  happened?
Marilyn: Everything. I had throat cancer twice, hernias, lost a kidney.. the list goes on and on. It's truly a miracle I'm alive.
Me: That's true.
Marilyn: You know, I really am Marilyn Monroe.  Oh, it was awful. People can be so cruel. They stole everything I had. So I got out.
Me: Where did you go?
Marilyn: I live right over here. Near Korea Town. I don't need much. I'll give you ten bucks for your TV. I can't fall asleep without one and mine was stolen.

Theoretically she could've been Marilyn Monroe. Marilyn was around 87, she had good skin. She looked much better than this pathetic meme on the internet, a very sad rendition... "If Marilyn Monroe were alive today." 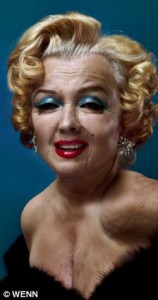 Marilyn: Oh! I love Fitzgerald. An era better suited for me. I'm a huge reader. I'm mad for Dickens. Do you have any iced tea? I had the throat cancer and get so parched. I'd kill for a parasol.

This woman spoke in a strange British/Bostonion accent. I wondered if she was schizophrenic. Then decided she was just lonely. My daughter brought her a glass of iced tea with a lemon wedge.

Marilyn: You have lovely daughters. I always wanted children.

This was now getting weird and I wanted her to go.

Me: You can just take the TV. Take anything you need.
Marilyn:  You're a dear. Bye-bye now.

With that, she jumped up, as though she was no longer in pain, and got in the car. Her nurse loaded in the TV and few other things including a couple Iphones. They waved.

By 1:00 pm everything was gone except for the sofa I loath. I had it reupholstered twice, yet, I've never been a fan. My style is now changing to minimalistic. Clean lines, no clutter, and the kids can sleep outside. 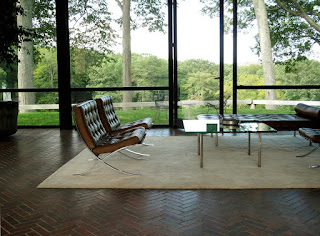 While I was inside the kitchen eating muffins and imagining myself lounging in Philip Johnson's Glass House,  I heard a motorcycle roar up. I looked out the window and saw Mark, who has a knack for connecting to any human, talking smack with a Hells Angel, or maybe it was an actor from Sons of Anarchy.  Soon they were besties, back slapping, laughing.

"This couch is perfect for my son. He just got out!"

Mark:  So happy to hear that. You can have it for 100 bucks.
Angel: Deal. I'll send a truck. It's all coming together for Junior.

I'm thinking of course, coming out of what? Prison? Rehab? The closet?

But who cares. Mark sold it. The difference between us is he actually sells the stuff while I just give it away.  I actually get angry when he puts prices on things.

Me: Are you joking. Who the hell is going to give you 50 bucks for the shit table?
Mark: What? It's vintage.

He got the 50. Then I made a deal, one I am most proud of. We had a rabbit hutch, very high quality, clean, fresh oak, and nearly new since the rabbit we bought it for died within a week of it's purchase.

We have so many animals in the back yard, particularly lizards,  it's possible the poor thing died of shock. 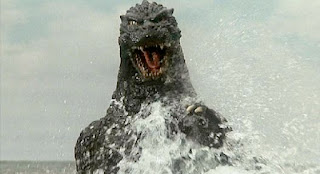 But the woman who wanted the hutch, also a neighbor, needed it for her chickens.

Neighbor: I can have this? It's perfect.
Me: Sure. Just bring me a fresh egg one day.

All said and done, we were done, and Mark gave me all the loot. The next morning, the chicken owning neighbor came by and gave me a basket of fresh eggs. People are so kind. 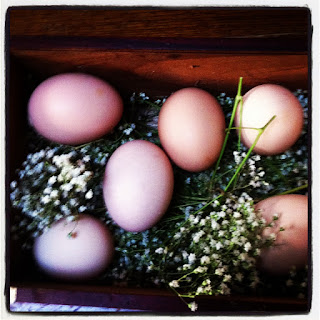 All in all, the estate sale was a success. Our house lost a lot of weight. Now I'm off to Cannes. I'll try to surreptitiously take pictures while on the many yachts I hang around in, then will give a full report on the shenanigans that are la Croisette. I know I won't have another Keith Richards encounter since they are touring and PS they were awesome, 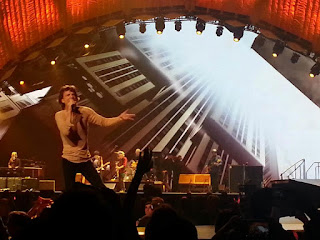 but maybe I'll trip in my stilettos in front of Ryan Gosling. Until then...
Posted by Rhonda Talbot at 4:09 PM