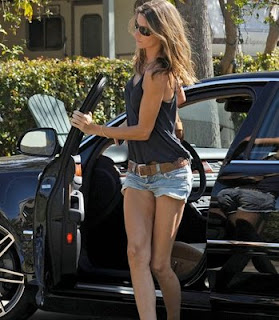 First, who knew Audi was the hot car to drive for many celebrities?  Daniel Craig, Liev Schreiber, Orlando Bloom, Miranda Kerr, the list goes on and on. This was a trend that started in England, but to the Royals it wasn't a trend. It was a car. Kate Middleton needed a durable, well made car. So of course Hollywood had to follow. I mean this has it's own Pinterest page! 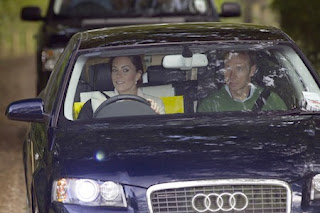 Audi is a very well made car. I used to have one. But not the Audi R8, which is the celeb preference. Plus I don't see myself shelling out 200 grand for a car. I don't like to bring attention to myself. Just not that kind of girl.

Anyway, so, more weird CAR STUFF! I must have been a crooked mechanic in another life to deserve all this automobile balderdash.

First, I had no idea that hit and runs were so common in Beverly Hills. Until I just became a victim of one. There were a number of witnesses, shop owners, who have seen this dozens of times.

Cars whipping down Beverly or Rodeo, clipping parked cars then hauling ass. What a mess. 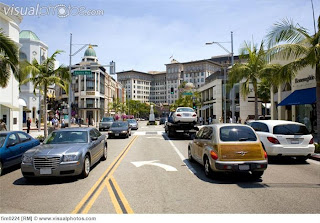 As most of my readers know I avoid Beverly Hills at all costs, even if it means going out of my way by hours hopping on circles of freeways. But the store that held my beloved new linens was located on Beverly Drive. So I pushed passed by fears to enter the hell hole known as BH. Whenever I do find myself there I'm met with this shit. 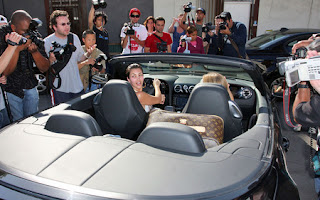 Kim Kardashian drives a Bentley by the way. But she too has a series of Audi R8's.

While parked at a meter on the street, in front of a lovely eyewear store, some crazy person tried to parallel park behind me. In the process, they hit my car. Given a number of people were watching, what was a girl to do? Rely on her acting skills. She placed a slip of paper on my windshield, essentially letting everyone know, "Hey, I'm responsible! Here's a bogus number." 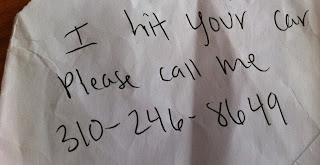 Then she blazed out of there, had no license plates on her car, thus no fear of ever getting caught.

A kind man came forward who had seen the entire episode. He worked at the eyewear store called Optica, seriously great people in there, not to mention fantastic frame wear. I'm actually going back to get fitted, I like the place that much. And I hate BH.

Anyway, he told me the entire story and we both just nodded our heads in that "some people" kind of way.

Me: What was she driving?
Man: The new silver Audi R8. No plates.
Me: Was she white?
Man: Yes.
Me: Blonde?
Man: Yes
Me: Actress?
Man: Likely. But I couldn't place her. She was just shouting "I'm going to be late for my audition!"

I totally get it. A 20-something actress, maybe a reality star, maybe an actor. Maybe on CW, maybe on MTV or Bravo? I certainly wouldn't know. But I do know how actors are about auditions. I have friends who are actors, many whom I love, but some will leave you bleeding in the street if they get a call from their agent regarding a sudden hot audition.

Actor Friend: So sorry. You'll be fine. This is an opportunity of a lifetime!
Me: Go. I'll just wait for some passerby as I bleed out. Break a leg.

The shop owner gave me more details. She was very busty, in the silicone way, wore a wife-beater with spandex pants and high heels. I put together a composite. 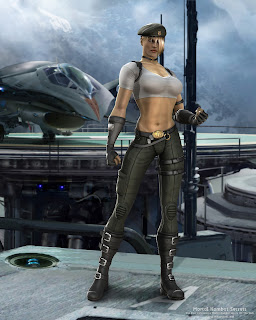 Given seemingly every actor in Hollywood drives an Audi, it's a long list, but here is who we can rule out because their cars were not silver.

Gisele Bundchen, Miley Cyrus, Justin Beiber!, Rosie-Huntington-Whiteley. Jason Stratham has one too. Matching sets. Cute.  Emma Stone, (who, btw, would leave a note because she is awesome,) Jonah Hill, (he may have been wearing a blonde wig, one never knows,) Jessica Alba, Goldie Hawn (not in her 20's) and Mitt Romney.

That leaves us with a few 20-30ish blondes that drive silver Audis.

Lauren Conrad. That is the car, but she does not have the proper bust size. Not her. 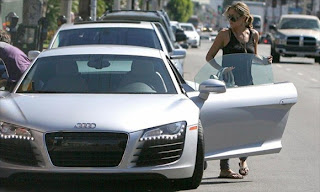 Lady Gaga. The hair is right, but alas, she is not a DD. 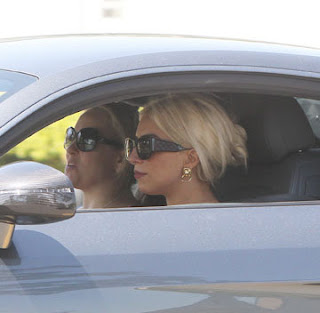 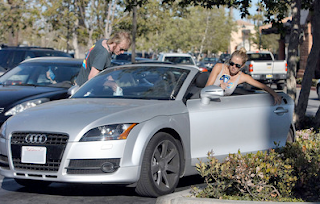 Anne Hathaway who is recently blonde but she's rail thin and I never think, Oh, Anne Hathaway, the girl with the giant bosoms. No. 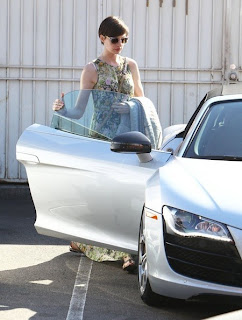 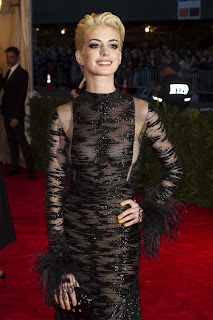 It's possible it was one of John Mayer's or Simon Cowell's girlfriends. Maybe they borrowed for a quick trip to Physique 57 to tighten their buns.

The fun part for me was learning about this Audi trend. Who knew? Maybe I should have kept mine on a short lease, then I too could be cool.

So, if you see a blonde wearing a super tight wife-beater on the side of the road scraping my navy paint off her car, try to get her phone number. Thanks!

What is the moral of the story? Stay out of Beverly Hills.

**The perp was not apprehended. Though known. If I were a horrible person, I could call TMZ and the police. But I shall not. Instead, it's dealt with. Let that be a lesson to hit and runners. People see you, famous or not. And no one likes this behavior.

Posted by Rhonda Talbot at 3:48 PM