My Downward Insulin Spiral to Near Death!


Not too long ago, I had a BBQ gathering, stuffing my face, making jokes, while getting into the spirit of the upcoming outdoor Karaoke contest. Then seemingly out of nowhere, a lovely fellow whom I had never met must have overheard me say, "Ugh, I feel so bloated," as I chomped into another burger.

Here is what I heard:

"Well, that's because you're on a downward insulin spiral! You're about to become a major diabetic. Chances are you'll have to have your gallbladder removed! Then develop liver cancer! Say hello to the Grim Reaper. He's standing beside you!"

This lovely man, Cesario Tio, probably did not say anything like that, but that's what I heard. First, why is this stranger talking about my gallbladder? Also, do I really need a gallbladder?

To save you trouble, readers, yes you need it.  You want to keep this thing happy. If you care, you can see more here -- https://en.wikipedia.org/wiki/Gallbladder


Nonetheless, who was he to tell me anything about my life? He was about to get an earful.

Most likely he said, 'Maybe you feel bloated because of all the refined sugars you consume.'

I looked at Cesario, who is incredibly fit, runs marathons, and is devoted to clean eating/living otherwise known as Paleo. In addition, he's very kind, helpful, incredibly educated on all matters of food and he's entrepreneurial. He just wants people to understand what they eat is actually very important. More on Cesario here.
But I knew nothing of this person so I thought he was judging me, and insulting me and I was furious.
"Well, Mr. Paleo guy, I happen to eat very wisely. This little BBQ is a one-off. So I had a burger. And pie. And cookies. But I don't drink, I exercise and I eat healthily."
"What do you eat for breakfast?"
Who was this guy? Now my girlfriends are leaning in, seeing how I'll handle this nutrition-freak interloper.
"I'll have you know I eat a trough of plain yogurt, covered with oatmeal, sunflower butter and a pile of fresh fruit. And some almonds. And coffee." 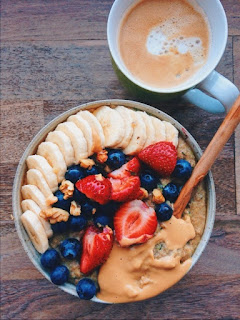 I was waiting to be congratulated on my excellent food choices but:
"Then what do you do? For activity after breakfast?"
"Activity after breakfast? All the action happened before breakfast, kids, carpool, possibly stopping for gas. After I eat, I write. For hours."
Technically that's true, but often there is more sitting and staring than actual writing. Still, how was this Cesario's business?!
"So after consuming over 150 grams of sugar and probably 2000 calories, you sit down for hours?"
A trick question, this menace of a man.
I went into some red rage and stalked off into my kitchen. One of my gal pals, Sydney, followed.
Me: "What the actual fuck? Who invited that guy? Fuck Paleo!"
Sydney: "He has some serious issues. Why is he attacking your breakfast? It sounds great by the way and super healthy."
Me: "Right? And I didn't even mention that I drink five glasses of whole milk a day. Not to mention bread. Loads of bread. Am I getting a gut?"
I was pulling on my excess stomach material.
Sydney: "Oh for god's sake, no. That's just baby fat leftover from the twins."
Me: "They're 14. I can't keep using that excuse."

We dissected this poor guy, conjuring up some imaginary life he had with other Paleoites as they ate root vegetables then ran uphill for 500 miles. Pathetic!

Sydney and I went back and forth, putting down the entire Paleo concept, community and decided Cesario was simply stuck in a cult.

The night ended up being really fun, lots of bad singing, dancing, and more pie.

The next morning I was still angry. Out of sheer spite, I made a "green" protein shake, something I found off a Paleo website. I have to say it was delicious. Then for lunch, no bread, just chicken. For dinner, fish, yams, and spinach.

I did this day after day until I forgot why. Suddenly I was off of dairy, white bread, most bread actually, and sugar, save a few gummy bears. And I felt amazing. My pants started to fall off, my stomach shrank, everything shrank. I had more energy than I had had in years.
Like this but not me: And I don't have an earring in my belly. 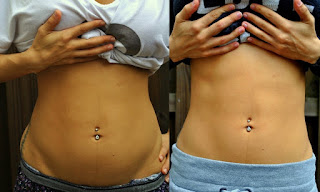 I learned a lot about myself that night. 1) I'm can be overly sensitive to anything. 2) I can create entire scenarios about people to suit my own perceptions of who I need them to be. 3) I can be a dismissive bitch.
Okay, so none of this is new. I've been working on improving myself since birth. It's a slow process.
But like so much in life, we only see what we want to see, and that's not a great thing. At least for me. Deep down, I knew my food plan was lacking, but I just didn't want to hear it. So thank you, Cesario, for having the 'gall' to call me out. It changed my life. This one small BBQ inspired me to learn about food, find new ways to consume food and live a healthier life. Because I'm now practicing better eating habits, so are my kids. It's a win for everyone.

An interesting anecdote -- In the Chinese language, gallbladder 膽 -- is associated with courage, boldness, bravery, heroism and apparently is where you make your best decisions. Where you chart your life's actual path! Who knew? 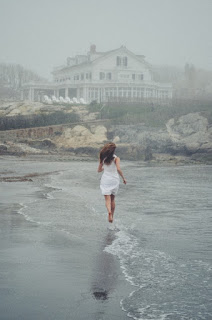 Still on course to that big white beach house that awaits me.